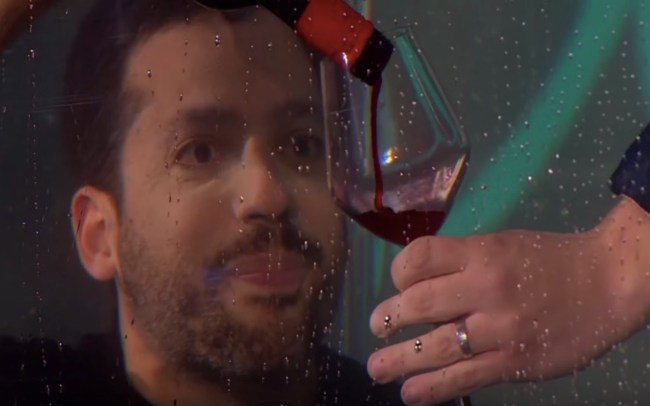 David Blaine is a modern sorcerer. I saw him perform his live show around this time last year and it was two hours of looking around in complete and utter astonishment and muttering the words ‘how in the fuck did he just do that?’ to myself.

Filming in London this week is The Late Late Show with James Corden. I can’t say that I ever watch this show when it’s on TV but I catch some viral clips on YouTube here and there. I’ll admit this now: I can’t stand the ‘Carpool Karaoke’ sketches which means I generally avoid his show entirely.

But the allure of David Blaine performing magic on The Late Late Show with James Corden was enough to have me track down some clips including this one of David busting out a mind-bending card trick. Blaine tells James Corden they’re getting in the water tank and James is all about it.

The top of the tank is open so James can take breaths as needed while David Blaine busts out the card trick but that’s not where the magic ends. Blaine then sends James Corden to run some errands all while David’s underwater holding his breath. And it all culminates with David drinking and smoking underwater…

Explain this one to me, please. How does he pull this off?

So I’ve always suspected that David Blaine pulls this off by breathing some extremely high oxygen-rich gas (or something else along these lines) before he goes into the tank because his lungs are much more full of oxygen than they normally would be from breathing regular air. And I believe this allows him to hold his breath for longer. That’s the only plausible explanation I can come up with for how he pulls off this trick.

When I saw David Blaine live last year he held his breath for over FIFTEEN minutes. It was basically the entire second act of the show. He set up the trick and then jumped in the water tank while another magician came out with a bunch of kids who all stood around the tank to prove that David was in there and swimming.

I’ve also thought about that water somehow not being regular water and some oxygen-rich that aids David Blaine in holding his breath but I don’t know enough about that to speculate. It does look more viscous than typical water but that could be the reflection from the cage that he’s built. But we need an explanation of why the wine poured so strangely at the end of the trick. Any bros out there have thoughts on this?