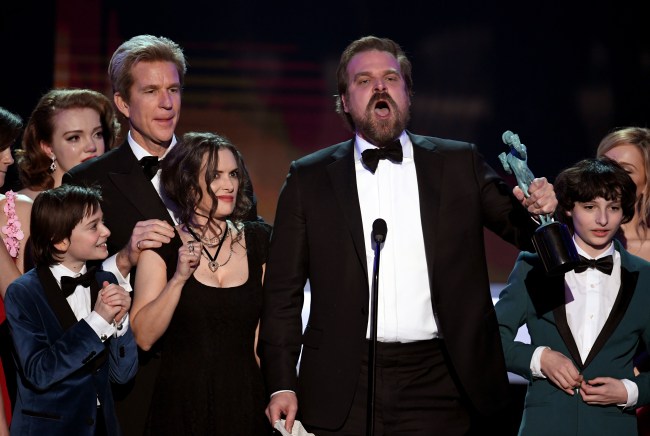 You may know David Harbour as Chief Jim Hopper, Hawkins, Indiana’s well-intentioned (albeit flawed) police chief in Stranger Things. Or CIA agent Gregg Beam in Quantum of Solace. Or Elliot Hirsch in The Newsroom. Or some other things.

The 43-year-old has life by the balls right now fresh off the success of Stranger Things, which helped him land the role for the title character in the reboot Hellboy.

Harbour recently appeared on Marc Maron’s WTF podcast in an episode released Wednesday and revealed his ascendence to Hollywood elite has been a mighty struggle. The New York native was diagnosed with bipolar disorder after his parents sent him to a mental asylum as a kid when his manic episodes made him believe he was having a religious epiphany.

“I have a capacity to see ‘the elves’ in the corners of the room if I really allow myself to go there. Yeah so I was actually — by my parents — taken into a mental asylum,” Harbour revealed.

“I have one thing to say about the mental asylum: I’ve romanticized two things in my life and both have fallen short. One is being in a mental asylum. Really not as fun as you think it is,” he continued. “You do have a romantic idea of it – [like] ‘you’re a genius’ — and it just ends up being sad and smells like s—t. And the other thing was boating. I just recently went out on a ship in open water and I’d read ‘Moby Dick’ a million times and it really is not as sexy. It’s very similar to the mental asylum experience.”

At the age of 25 Harbour was diagnosed with bipolar disorder and has been medicated ever since.

“That’s actually when the drugs came in,” he said. “I’ve been medicated bipolar for a long time. And I’ve had problems going on and off. I’ve had a struggle. Going on and off the medications.”

Harbour revealed that when his episodes manifest in religious experiences, he immerses himself in distractions.

“The funny thing about my brain is every time I’ve had an episode like that it’s coupled with spirituality. Generally, people are like ‘I need to meditate more’ or ‘I need to get into yoga,’” he remarked. “And I need to like, eat a cheeseburger and just like smoke cigarettes and hang out. Because like the minute I get close to that – what I consider a flame – of like ‘the answers’ and the mysticism, and I’m like ‘completely present,’ it’s like I’m out of my mind. So if I write the self-help book, it’s going to be like, ‘Sit on the couch and play some video games.’”

It’s really awesome to see influential figures talk so bluntly about mental health. If Harbour revealed these personal intricacies not too long ago, he’d be thrown in a straight jacket and sent to Hawkins National Laboratory for testing.