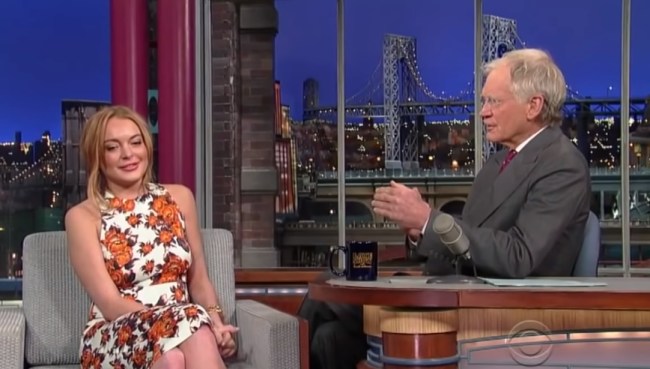 Since the release of Framing Britney Spears, fans have been going back to take a critical look at how the media treated stars in the early 2000s.

Justin Timberlake, who was featured in the doc and faced backlash due to his public treatment of Spears 20 years ago, apologized to hir former girlfriend on social media.

The Internet has moved on from Timberlake and is bow targeting David Letterman for his interview with Lindsay Lohan from 2013.

While making an appearance on The Late Show With David Letterman to promote her Scary Movie 5, Lohan was grilled by the TV host about her history with substance abuse which many felt was unwarranted.

During the interview, Letterman straight up asked the actress “Aren’t you supposed to be in rehab now?” which led to a stunned Lohan reluctantly answering by saying she would be entering rehab on May 2. Letterman continued pressing Lohan about how many times she had been to rehab and the interview got extremely awkward.

This Lindsay Lohan interview on David Letterman in 2013 is horrifying to watch now. pic.twitter.com/lZxKVvbVB0

David Letterman owes Lindsay Lohan an APOLOGY LIKE YESTERDAY. This is disgusting. I’m tired of interviewers weaponizing mental health & using personal struggles as the butt of your ugly jokes !!! Glad she was standing up for herself here. But even the audience laughing is 😡🤬 https://t.co/UbqwUi71PR

David Letterman thought it was funny to joke about Lohan's substance abuse problems in this way? Wow. I've never seen this. It isn't horrifying to watch now. This was always horrifying. And this clown thinking it's fine to put her down this way. She's a human being. https://t.co/WOhKZDcdIE

It wasn’t funny then either, but #davidletterman isn’t funny ever, so I wasn’t even aware this happened. So inappropriate 😬😭 https://t.co/WyxuxvT7DY