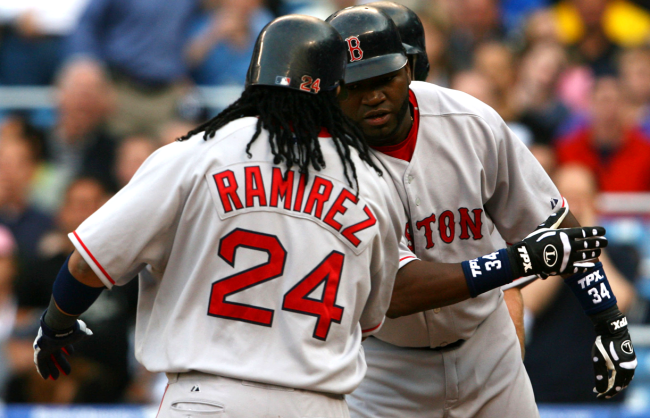 The kids of professional athletes often have it pretty good. One, they’re born with tremendously athletic genes. Two, their parents are usually very wealthy. And three, they have the advantage of having a parent who played a professional sport and their peers in the sport to help guide them.

This is why you see things like Andruw Jones’ son Druw Jones absolutely crushing their opponents while they are teenagers.

It’s also why there is a new batch of former players’ sons like Jones, Jack Leiter and others that are rapidly making their way to the big leagues.

A couple of those other names who are on their way to getting onto that list are the sons of former Boston Red Sox sluggers David Ortiz and Manny Ramirez.

Hard to believe, especially since Ortiz last played in the Majors in 2016 and Manny in 2011, but their sons D’Angelo Ortiz and Manny Ramirez Jr. are 17 and 19 years old, respectively.

They have also both just graduated from high school with Ortiz heading off to Miami Dade College while Manny Jr. will be attending Tallahassee Community College.

Before that though, the boys are teammates on the Brockton Rox of the Futures Collegiate League and on Sunday, just like their dads did so many times before while playing for Boston, Ortiz drove Ramirez in with an RBI single.

By the way, the two Red Sox sons also shared the right side of the infield for the Rox with Ortiz playing second base and Ramirez at first during the game.

Many baseball fans, upon seeing the highlight, suddenly felt very, very old, especially when someone on Twitter mentioned that Pedro Martinez, Gary Sheffield and Keith Foulke’s sons also played in that game for the Brockton Rox.

What was most impressive was that the sons spent at least an hour signing autographs of baseballs and hats and other stuff for fans in Brockton. Manny Ramirez even gave my son his broken bat from the game. pic.twitter.com/HFpDLWy8yf

Hold on Boston fans round 2 is just a few years away.