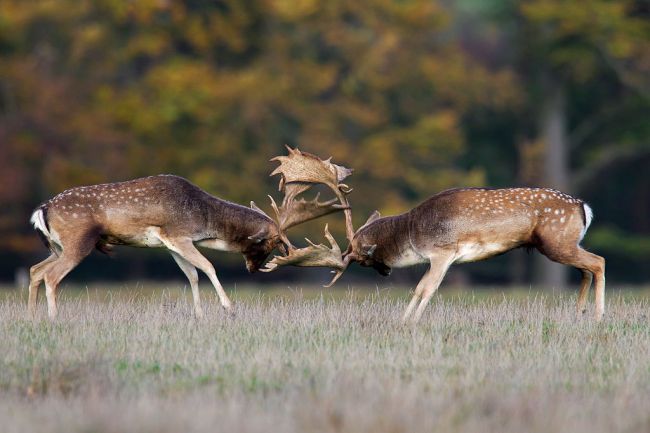 There are many times where words don’t do an image justice, and this is one of them. A wildlife photographer named Colette in Hokkaido, Japan captured a stunning photo of a Sika deer wandering through the snowy terrain with the head of another deer stuck in its antlers. It’s hard to make out what is happening upon first glance, but a lengthier look will lead you to realize how insane it really is. The buck is walking around face-to-face with another male Sika that has lost the rest of its body.

Like the photographer mentions, if the deer is not able to shake the severed head, it will have to survive until the late winter with its decapitated counterpart. All deer shed their antlers as spring rolls around after a drop in testosterone ends their life cycle. The deer then regrows their antlers from spring through late summer. Until then, you can find the buck walking around like this:

As for how the head got stuck in the antlers without a body attached, there may be a few explanations.

The first and most plausible sequence is that the other deer was already dead. Part of the mating process for deer includes jousting matches to determine who can mate with available females. During mating season, which is right about now, testosterone is pumping through a buck’s veins. They are so jacked up on hormones that they will lock antlers with any buck that crosses their paths— even dead ones. That is likely the case here. The bodiless deer may have already been deceased and decaying when the living deer tried to joust, which would make it very easy to remove the head from the body.

A scenario involving two live deer is also possible. The two may have locked antlers while living, and the now-bodiless deer may have died during the battle. If that was the case, the living deer would have had to drag the dead one around until decomposition allowed him to to shed 90% of his deceased opponent.

Either way, what the photographer was able to capture is truly remarkable. It’s a shame that there isn’t a way to track the deer and see how it plays out.