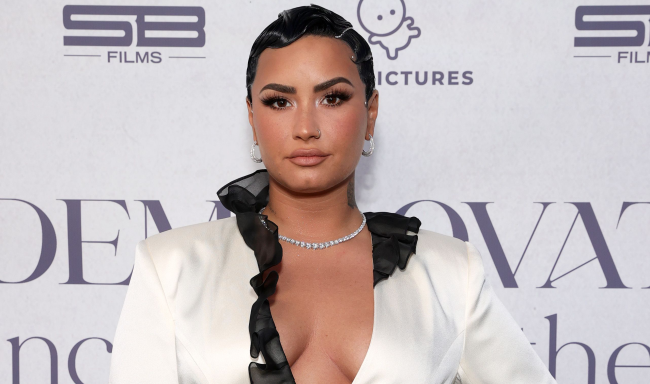 Over the weekend, Demi Lovato started a hashtag on social media to call out all of the “diet culture vultures” of the world after going off on a local frozen yogurt shop, The Bigg Chill, for selling sugar-free cookies and “other diet foods.”

“Finding it extremely hard to order froyo from @TheBiggChillOFficial when you have to walk past tons of sugar-free cookies/other diet foods before you get to the counter, Do better please,” Lovato wrote on Instagram, adding the hashtag “#dietculturevultures” then explaining her new purpose in life. 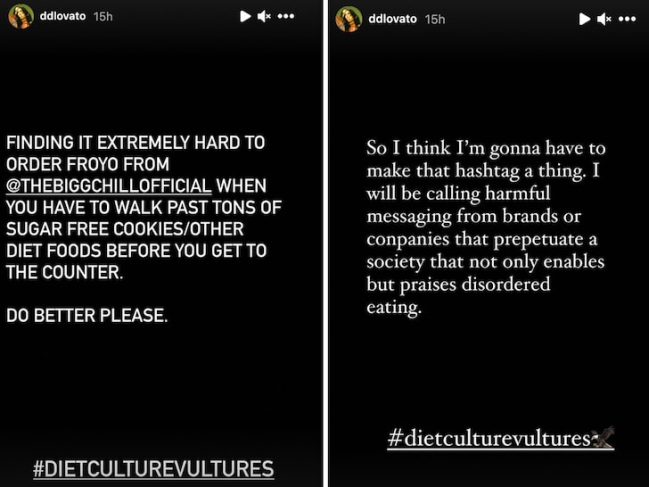 The Bigg Chill shot back at the singer, pointing out they “carry items for Diabetics, Celiac disease, Vegan and of course have many indulgent items as well.”

Lovato, not satisifed with that answer, then posted the DMs between herself and the fro-yo shop.

“We are not diet vultures. We cater to all of our customers’ needs for the past 36 years. We are sorry you found this offensive,” wrote The Bigg Chill.

Lovato responded that the labeling of the food items wasn’t her only problem with the shop. She also called them rude, said their service was terrible, and that “the whole experience was triggering and awful.”

Mind you, Lovato has 102 MILLION followers in Instagram, while The Bigg Chill has just over 9,600. Not really a fair fight here.

Lovato then continued her diatribe, telling The Bigg Chill, “I was thinking, maybe it would help if you made it more clear that the sugar free options and vegan options are for that. Labelling the snacks for celiacs or diabetes or vegans. When it’s not super clear, the messaging gets confusing and being in LA it’s really hard to distinguish diet culture vs health needs.

“I think clearer messaging would be beneficial for everyone. You aren’t wrong for catering to different needs but it’s about not excluding one demographic to cater to others.”

Lovato then lauded herself for “keeping this transparent even tho I’m done” with harassing the fro-yo shop, oblivious to the negative way she came off in the interaction. 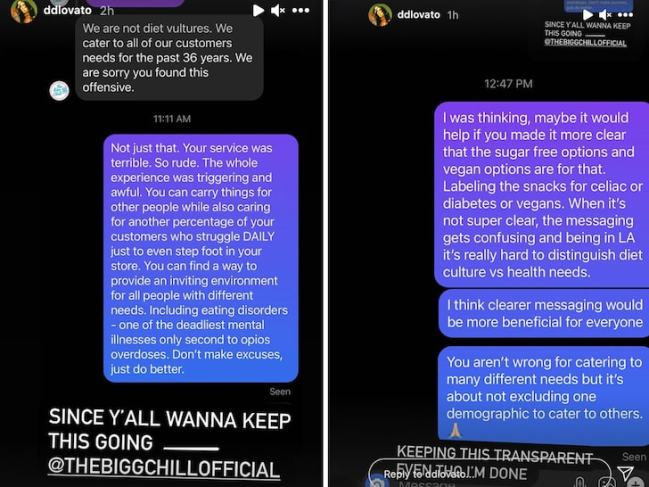 While her intentions may have been good, a whole slew of people on social media did not appreciate the way Lovato handled the situation.

I love Demi Lovato, but girl…“Low-fat”, “fat-free”, etc. is something advertised by a lot of companies. If we throw the froyo shop away, we gotta throw other comps away. Ppl wanna eat healthy junk too. It was triggering for you, not ED survivors as a whole #dietculturevultures pic.twitter.com/eTG3L0sIRS

Demi Lovato when she saw the sugar free cookies

i legit cannot stand demi lovato. this restaurant is not the cause for ur triggers. sugar free cookies do not classify as “disordered eating” if ur in the right mindset. if ur not, then it’s not the restaurant’s fault. the way she PUBLICALLY called them out was so immature pic.twitter.com/aETygKvK1L

Demi Lovato when she has to walk past "Sugar free/diet food" written anywhere pic.twitter.com/MlTjtnbZgF

demi lovato when the soda machine has diet coke pic.twitter.com/z1JrYmGV8k

Demi Lovato got 102 million followers and she’s attacking a small frozen yogurt business with 7k. I understand the frustration, but that’s not solving anything.

On the plus side…

Thank you Demi Lovato for turning me onto a new froyo spot 😂 pic.twitter.com/nBXY5u8jse