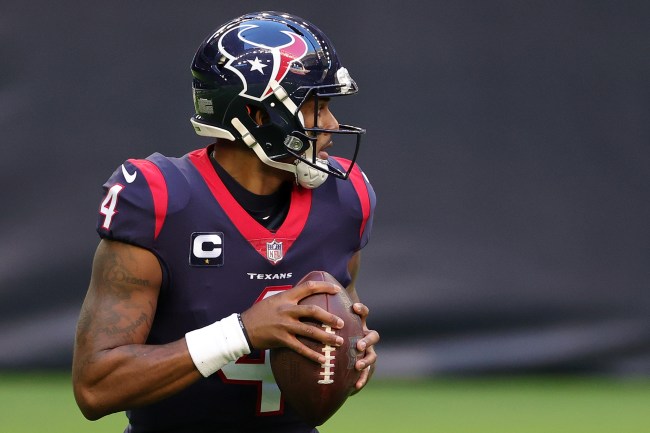 The NDA Houston Texans QB Deshaun Watson allegedly tried to get his sexual assault accusers to sign has leaked to the media.

Last week, lawyer Tony Buzbee, who is currently representing 20 women accusing Watson of sexual assault, responded to Watson’s marketing manager claiming that the QB’s sexual relationship with one of the accusers was “consensual.” Buzbee went on to say he would release an NDA Watson and the business manager tried to get the woman to sign after he allegedly harassed her during a massage session.

That info will be released, again in public filings—not in the media. My second reaction is a question: why would his marketing agent admit Watson had sex for pay with a massage therapist, consensual or otherwise?”

“We will also provide a copy of the non-disclosure agreement that Deshaun Watson and his marketing manager repeatedly insisted that Jane Doe (and others) sign after (and sometimes before) the “massage session,” which she refused to sign.

On Friday Houston area news station KPRC 2 News revealed they had obtained an NDA Watson sent to one of the women in the lawsuit against him.

KPRC 2 News has obtained exclusive access to an NDA (Non-disclosure agreement) that Deshaun Watson allegedly sent to one of his "Jane Doe" accusers.

The authenticity of this NDA has been independently verified by KPRC.

KPRC 2 legal expert Brian Wice took a look at the document and provided his opinions.

According to Wice, he doesn’t feel it’s strange that for Watson to have provided the masseuse with an NDA due to his celebrity status,

“If you are an A-list celeb or a top jock, it’s not out of the question for you to want to keep your business off of social media,” said KPRC 2 legal analyst Brian Wice, referring to the non-disclosure agreement. “Most people might not think it’s common for someone to sign an NDA when they walk into a massage booth, but if you are an A-list celebrity or top athlete you want to make sure that what you do stays off of the 24-hour news cycle.”

Wice did think the NDA allegedly sent by Watson to the accuser was “amateur hour.”

But Wice calls the document that sources say Watson sent to one of the massage therapists, “amateur hour.”

“With all due respect, it appeared to me that someone merely downloaded a standard non-disclosure agreement off of the internet or maybe they went to NDAs R’ Us,” Wice said. “Nothing stands out about this NDA.”

Sources told KPRC a masseuse asked Watson for a signed copy of the non-disclosure agreement she had signed but only provided her a blank document without her or Watson’s signatures which Wice felt was probably unethical but not illegal.

“There is no law that requires it, but I would think that as any competent ethical lawyer you would want to make sure that you had a copy,” Wice said. “The only exception being if, at the end of the day, there is something not quite kosher about it. Maybe you don’t want that extra signed copy circling.”

At the end of the day the NDAs wouldn’t hold up in court if Watson committed sexual assault because they don’t protect against criminal behavior.