Not even a month ago, Wiz Khalifa and Charlie Puth’s song “See You Again” written for “Furious 7” dethroned Psy’s 2012 chart-topper “Gangnam Style” as the most-watched YouTube video of all-time. “See You Again” had a short reign on top because Luis Fonsi and Daddy Yankee’s “Despacito” is now the most-viewed video in the world. At the time of publication, the song broke the 3 billion mark and has a mind-numbing 3,015,567,921 views compared to 2,997,389,214 views for “See You Again.”

This is a rather remarkable achievement for “Despacito” became the YouTube king in only seven months, where as “See You Again” was released back in 2015. “Despacito” was released on January 12, 2017, and it has had a viral explosion like no video ever. “Despacito” has dominated the Billboard Hot 100 for an amazing 12 weeks. 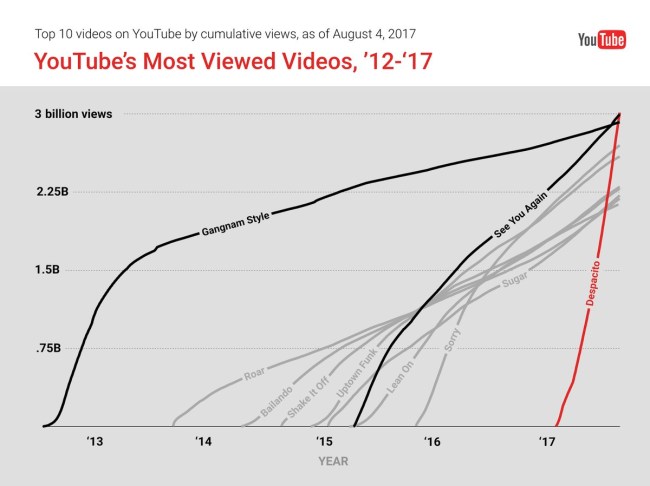 Daddy Yankee reacted to the record-breaking news with an Instagram video. “I recognize the influence that the platform has,” Daddy Yankee said. “The music industry has changed. The rules of music have changed. And YouTube has a big responsibility, and I recognize it. Breaking the record is overwhelming, and I’m happy to keep [inspiring] others to do the same.”

This dancing Irish grandma knows that “Despacito” is the song of the summer.