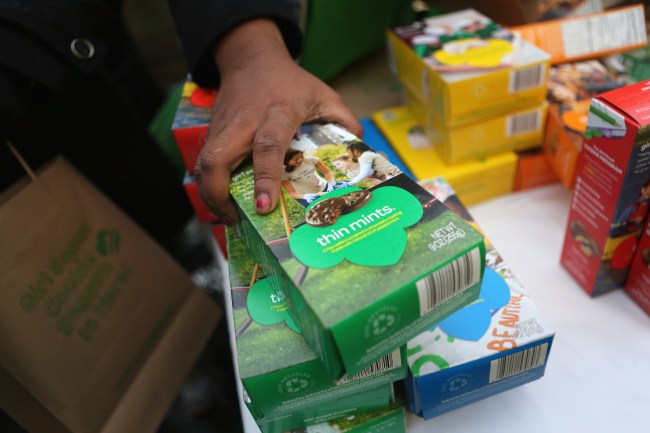 We’ve got our first official ‘Milkshake Duck‘ of 2019. That term made it into the Oxford English Dictionary and was named ‘Word of the Year’ runner-up in 2017. It’s defined as “a person or character on social media that appears to be endearing at first, but is found to have an unappealing back story.”

Last week, Detric McGowan went viral after spending around $500 on Girl Scout cookies at the grocery store. He initially spent $40 on cookies and then came back and dropped $500 on 121 boxes so that the Girl Scouts wouldn’t have to stand outside in the freezing rain and sell cookies.

Everyone loved this story. It seemed like a kind and thoughtful act from a good Samaritan. Now, the origin of that $500 he spent on Girl Scouts cookies is being called into question after Detric McGowan was just busted in a years-long DEA investigation and hit with a slew of very serious drugs-related charges.

Charges in the indictment include the following:

EXCLUSIVE: It was through our reporting that we learned that the man — identified as Detric McGowan — was arrested Tuesday morning by the U.S. Drug Enforcement Agency (DEA). https://t.co/bPL6ydwU2Y

Intent to distribute heroin. Trafficking cash over $1 million. Conspiracy to import drugs and sell those drugs. Sounds like this guy could be going away for A LONG time.

The DEA said that the cookies purchase had absolutely nothing to do with the arrest, and a spokesperson for the Girl Scouts has released a statement:

The DEA said the drug “arrest is completely unrelated to the cookie purchase,” according to the TV station.

“Nobody was hurt. Nobody was threatened. We had no reason to believe that this man was anything other than one of our valuable customers that is helping Girl Scouts power awesome experiences through the Girl Scout Cookie Program,” said Karen Kelly, vice president of recruitment and marketing for Girl Scouts of South Carolina-Mountains to Midlands, according to the Greenville News. “This is now in the hands of law enforcement and of course we will cooperate with authorities.” (via The State)

If you’re interested, you can read the full indictment by following that link. You can also find more details about this story on The State if you have more questions that need answering.