The Third ‘Sherlock Holmes’ Movie Is Actually Happening And Will Be Released In 2021! 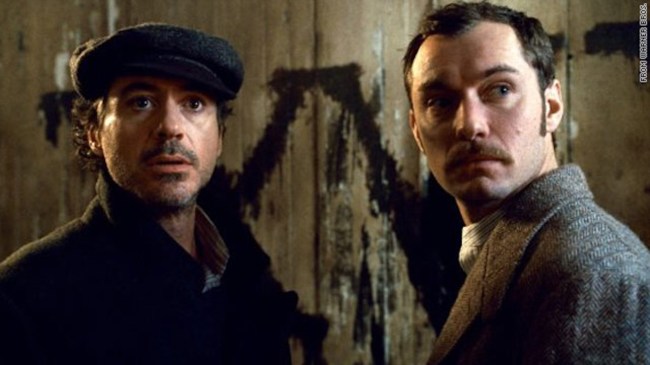 For the last decade or so, Robert Downey Jr. has been so synonymous with the role of Tony Stark and Iron Man that it’s almost difficult to remember him ever playing anybody else.

Lest we forget that Downey starred as Detective Sherlock Holmes in the Guy Ritchie directed film that came out just a year after Iron Man.

And truth be told, I thought both Sherlock Holmes and its 2011 sequel Sherlock Holmes: A Game of Shadows were genuinely more of the inventive and entertaining blockbusters going at the time.

Could most of that affection be derived from Downey Jr’s effortless charisma and Guy Ritchie’s always eye-catching style? Probably. But no matter the reason, the Sherlock Holmes franchise was one that I was happy to see more of (critics obviously didn’t agree, though, as A Game of Shadows currently sits at 66% on Rotten Tomatoes).

However, despite the lukewarm critical reception to the sequel, the film still made over $545 million at the box office, leading Warner Bros. to commit to making a third film. The only problem is that film has been stuck in developmental hell since 2011.

And yes, while the wait certainly has been long, it appears as if the third Sherlock film is finally happening, as Rocketman director Dexter Fletcher has signed on to direct the film, which is set to see Downey Jr. return as Sherlock and Jude Law return as Dr. John Watson.

They’ve certainly built up ample anticipation, as the still-untitled third film in the franchise will be released on Wednesday, December 22, 2021, which is an entire decade after Sherlock Holmes: A Game of Shadows was released on December 16, 2011.

Prior to the third Sherlock Holmes film, Downey Jr’s first major post-Marvel Cinematic Universe role will come when he stars as Dr. John Dolittle in the 2020 film The Voyage of Doctor Dolittle.

While RDJ was legitimately and consistently fantastic as Tony Stark, it’ll be exciting to see where the supremely talented actor will take his career now that he’s no longer contractually bound to the MCU (although he’ll probably pop up again there at some point, too).