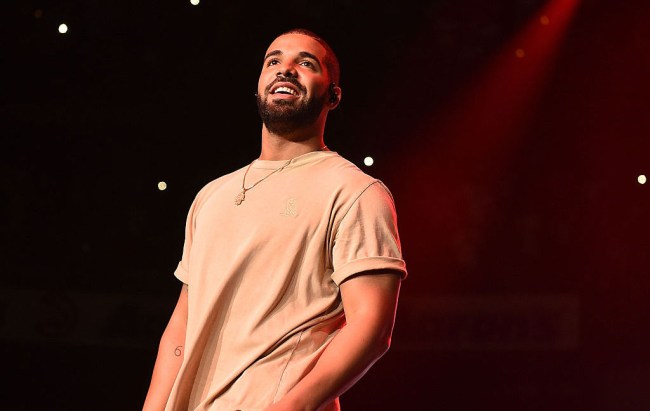 Over the past few years, Drake has found himself at the center of an impressive amount of hip-hop beef and was thrust back into the middle of some more rap drama earlier this year when Pusha T went scorched earth a few months ago by airing a freshmen dorm’s worth of dirty laundry.

There were rumors that Kanye West gave The L. Ron Hubbard of the Cupboard some ammo he could use to make Aubrey sadder than he usually is, but there was no hard evidence to back this claim (which didn’t stop Drake from throwing shade at Kanye anyway).

If rap superstar Nick Cannon is to be believed, Kim Kardashian may have also played a roll in stoking the flames, and if a random person on the internet is to be believed, there’s a chance this saga could get even wilder than anyone could have imagined.

Last week, someone on Twitter went full National Treasure to outline a conspiracy theory that could change the world as we know it while arguing Drake has been leaving a trail of breadcrumbs to let the world know he got Kim to cheat on Kanye with him.

I suggest you strap on your tinfoil hat before jumping headfirst into this seemingly endless rabbit hole.

It might be a long ride but it’s well worth the journey.

Drake’s been telling us for months now he slept with Kim K, we just haven’t been listening

To start, we have to fully understand the origins of the current beef between Drake and Kanye.

He also spoke about how Drake and Ye have been beefing since they were together in Wyoming. Which prompted the whole Push-Drake feud pic.twitter.com/vWsBPaPTSG

The drama then turned to some seemingly coincidental Instagram captions.

Now I’m like, okay, there is no way this is random. So I sat down and decided to take a closer look. pic.twitter.com/0qqxwSclhz

This led to a deeper look at some thinly-veiled lyrics.

Thought to myself, Kiki is pretty damn close to Kim. Quick twitter search and I find these. pic.twitter.com/4cZkS7Rrs5

Fast forward to the end of the song.

In My Feelings. Kiki.

Now he’s got drama over Kim and the tie between him and Kanye is done because of it. Except what’s the drama about? pic.twitter.com/x082tyzRqB

Most people agreed Drake took the L by default by not responding to Pusha but the theory says there’s a chance this is just a long con on the Canadian’s part.

But hold on, maybe Drake does have something on Ye…

(G.O.O.D is the name of Kanye’s record label – I think Drake is saying in 8 Out of 10 Kanye is lucky he never responded with the 2nd diss) pic.twitter.com/SQDcdo8Fcz

He examined some other lyrics before circling back around to examine Kim’s preexisting relationship with Drake.

So just how close do Drake and Kimye live from each other? Sounds like pretty damn close.

If you’re not convinced by now, let me go ahead and erase all doubt.

Of course, no true conspiracy theory is complete without a map with lines drawn on it.

“I crept down the block,
Made a right,
Cut the lights,
Paid the price.” pic.twitter.com/2D91btFg4T

The investigation closes with one final lyrical analysis that lets readers come to their own conclusion.

I think Scorpion was originally mostly Side B until Ye snitched to Push about Drake’s kid. Once that got exposed, Drake made Side A to not only go after Kanye, but subtly tell us about the history with Kim. pic.twitter.com/3x6Y1OY8oA

I’m normally not one for Kardashian drama, but if this turns out to be true, we’re going to have some 90s-level rap beef on our hands.