INTERVIEW: Diego Luna Wants To Bring Humanity To The Monsters 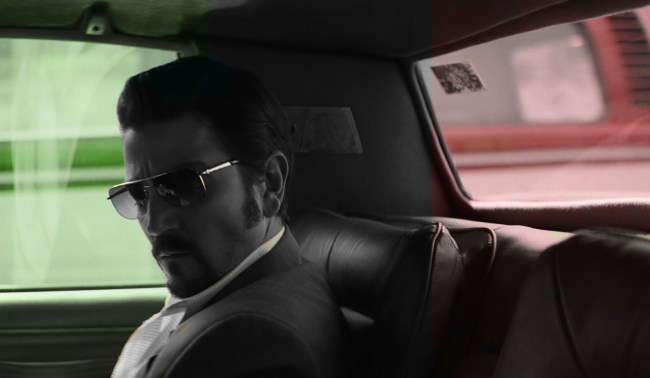 Ahead of the premiere of Narcos: Mexico Season 2, BroBible got the opportunity to speak with Diego Luna — star of massive Hollywood projects such as Rogue One: A Star Wars Story and the upcoming Cassian Andor Disney+ series — who returns to Narcos: Mexico for season two as infamous Mexican cartel kingpin Miguel Ángel Félix Gallardo.

(Editor’s Note: *light spoilers* for season two of Narcos: Mexico will follow. This interview has been edited and condensed for time.)

On how his personal experiences shaped his performance of Miguel Ángel Félix Gallardo.

Eric Italiano: First, Diego, thank you for your time, it really means a lot and I’m a huge fan. And congrats on a fantastic season of TV. I really thought this was the series’ best — just balls to the wall from beginning to end. The whole season is really infused this ticking time bomb aspect.

Diego Luna: Oh, well, thank you so much. Those are some beautiful words.

EI: Well, I get paid to write them, so, every now and again I hope to string a couple of decent ones together. I want to get started with a little bit of your personal life. During the height of Felix’s era, you were still a boy, but certainly old enough to remember. What do you remember about those years and how much did you incorporate any personal experiences to your performance?

To build the character, it was interesting to find out how discreet he was, at least through his whole beginning. All the material you can find is from after they got him, you know? The stages I’m portraying are before that, so I had a lot of room to be creative and to imagine and create my own character. What I decided is to intense research on what people said about him — to me, that was the key. Because there is a very long interview he gives from jail. I did read that, but I decided not to be based on that — I decided to base my character on what people said about him, how people would describe him, because at the end, that is impressive he was living everywhere, no? So I wanted to focus on that.

Another thing was researching the Mexico he lived in. The Mexico of the 70s and 80s and looking at that part of the history of my country from another perspective — not one of the kid I was back then, but find out the Mexico that my father was trying to hide from me.

Bringing humanity and empathy to a character that doesn’t deserve it.

EI: You make a great point because Felix is somebody that’s a very real and very evil person, somebody that directly had an impact on your culture and your way of life, so I was just wondering if you could walk me through what your thought process of bring a sense of depth and nuance — and what I found to be empathy and humanity — to a character that may not deserve it.

DL: What you have to do in a job like this is leave aside all your judgment, you know? We have to eminate the character, we have to understand why he’s doing what he’s doing, and you have to believe in what is triggering the decisions he makes. It has to be real, something you can relate to. That’s the bizarre part of my job. I see the horror behind all of these decisions, but as an actor, when you get a script, you have to understand why he does this or that, and you have to find something that you can interpret with truth. The first rule is not to judge the character. Not to say “I’m playing the bad guy” because then you start *talking like the bad guy* and you *walk like the bad guy* and you become a cartoon. The idea of this show is to humanize these people and to talk about the complexity.

Without spoiling the ending, you realize that they’re all victims of this system in a way. There’s something bigger than them, you’re always working for someone else, there’s always someone on top of you. And in this case, it is the system that is completely corrupted but it leaves these characters to blame. I’m not saying what they do is okay, but I’m just saying it’s more complex than how we normally tell the stories.

Normally, you say “oh, there’s a bad guy out there, let’s put him in jail!” Well, no, the problem is not that, the problem is the strategy used to fight these people has failed. Prohibition is clearly a war we’ve lost. And for an issue that is global, it’s quite unfair that the most amount of violence is happening Mexico, while the solution of the problem needs to come from everywhere, not just Mexico. It’s a global issue that we have to handle together.” 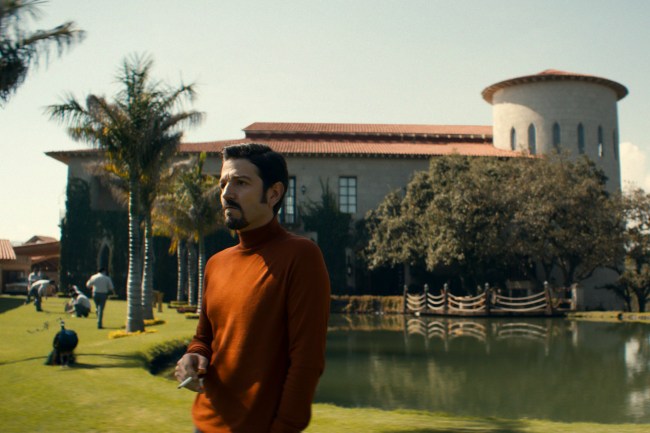 EI: I agree exactly with what you’re saying about “being the bad guy”, because the show makes every major player — whether it be the cartels or the feds or the politicians seem like both a good guy and a bad guy at the same time. So, when it comes to your performance as Felix, was there any difference in how you portrayed dealing with a legit foe like the feds versus more underground foes like the cartel? Or do you think he applied the same mindset and tactics to both battlefronts?

DL: That’s a very interesting question. For myself, every time my character thinks about a move, he’s thinking as if he were a corporation. But doesn’t he doesn’t have the consequences of what he’s doing on his mind, so I think he created such a big monster that all he’s doing now is trying to survive and keep it together. I think he loses the ability to actually plan ahead, which is something he did well is season one. He believes in what he’s doing and what he’s created. He believes there’s a way of doing things right. In this bizarre way, he thinks what he’s doing is right and what everyone around him is doing is wrong. So for him, that’s what I was using an indication — he is always thinking on how to protect what he’s created.

The influence of Julius Caesar and the Romans.

EI: You touch on the fact that what he thinks he’s doing is right — a big theme of this season is the Romans and Julius Caesar, they bring it up overtly a few times. Did you personally read into Caesar and Rome to inform your portrayal?

DL: It definitely works as a metaphor for what happens to him. Definitely. It was quite an interesting thing that obviously the writers talked to me about and that we explored this season.  And it’s interesting to see it from the perspective of the actor — when we talk about playing this character, it’s all about intuition, he’s reacting as his moves. And it not until someone mentions [that comparison] that he can actually see it and say “holy crap, there is a similarity here.”

EI: To what you just said about Caesar and Rome, I found that one of Felix and Walt’s biggest character flaws is their hubris — how do you think someone as sharp and astute as Felix so severely overlooked the consequences of killing Kiki Camerena?  He seems to be the only character on the show who isn’t aware of what he’s done. Did you work that into the performance at all?

DL: I think that is a sign of how assimilated corruption and therefore impunity had become. He thinks he lived in a country where if he knows the top people, if he’s close to the President of the country, then he’s protected from anything, right? He really doesn’t see it coming because he thinks he’s untouchable. And the system reminds him that he’s not. It’s the system that matters, not the people in it. The system gets rid of you the moment you’re not useful anymore. And that’s what he’s going to learn through the season. 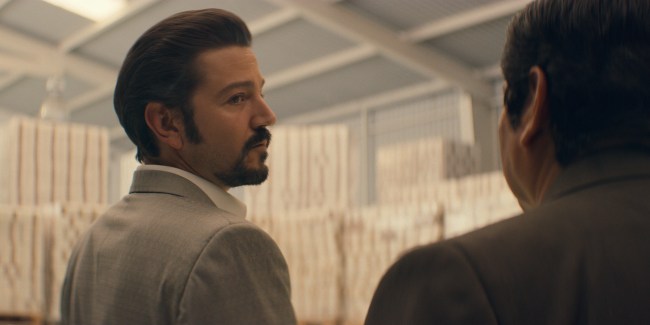 Chicharito, the Galaxy vs LAFC rivalry, and soccer in Los Angeles.

EI: Just to talk on your personal life real quick, you and I share something in common: we’re both huge football fans. So I was just wondering if you had any thoughts on (former Manchester United and Real Madrid striker) Chicarito going to the L.A. Galaxy?

DL: Chicarito is coming to the Galaxy, come on, those matches are going to be amazing! Chicarito vs. Carlo Vela (fellow Mexican star who plays for rival LAFC). They’re gonna be fantastic: the L.A. Clasico is going to be so fun to watch. And not just because you have two really big Mexican stars, but they both play forward. So, they’ll get the attention. I’m definitely going to go to see them. I’m glad they’re finding the enthusiasm because both of them enjoy football very much, so I’m glad Chicarito is here, he’s gonna get to play a lot. You know, he needs to be playing.

EI: And he’s still a young man, I think he’s got plenty of gas left in the tank.

DL: Well, the last two teams he was on, he didn’t have good luck, I guess he didn’t arrive at the right time. When a player plays well, we all say “ahh, what a great player!”, but to play well, you have to play in a good team. And the team has to play really well with you, too. It’s not like you find a guy playing great in a team that doesn’t know how to play football, so it is about the team and collaboration. But now he’s coming to a good team and when you’re in L.A., it’s like being in Mexico, too, so he’s going to be at home.

EI: For sure, I think it’s going to be a huge hit. Diego, thank you so much for your time, man, it’s been a blast. Cheers.

DL: Thank you, thank you so much for this interview. Take care, Eric. 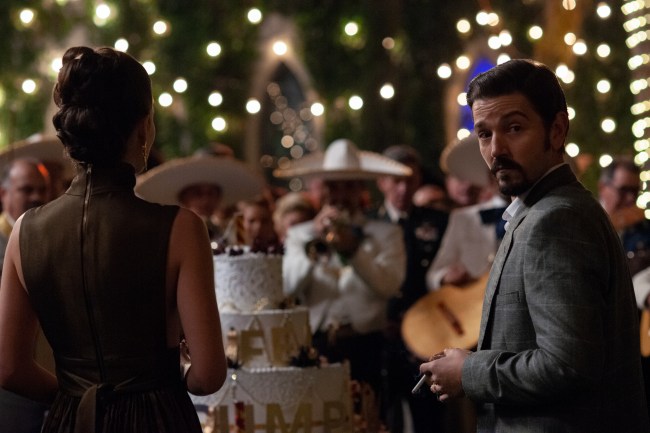