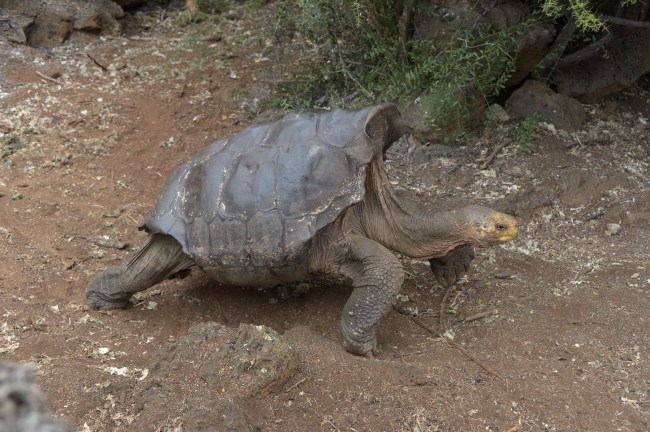 Diego the Tortoise is 100 years old but he’s been getting busy fucking to help save his species.

Diego was taken from the Galapagos Islands to help breed with other giant tortoises in a special program conducted by the San Diego Zoo where he helped birthed over 800 tortoises to keep the species from extinction.

A 100-year-old Galapagos tortoise who single-handedly saved his species by fathering 800 offspring is set for release.

Around 50 years ago, there were only two males and 12 females of Diego’s species alive on Espanola, and they were too spread out to reproduce.

Diego, believed to be taken from the Galapagos Islands, was recruited along with 14 other adults for a captive breeding programme and will be returned to his native island of Espanola in March, the Galapagos National Parks service (PNG) said yesterday.

Diego’s contribution to the program on Santa Cruz Island, Southern California, was particularly noteworthy, with park rangers believing him responsible for being the patriarch of at least 40 percent of their 2,000-tortoise population.

Diego is headed back home to the Galapagos Islands and is being heralded a hero for his efforts.

A hero of our time https://t.co/DzLtbilP8Y

The Flash Gordon of giant tortoises.

no accomplishment can touch "single-handedly saving a species"https://t.co/4Q0v4zqoOu

Getting away from all the doom and gloom here is something to make you smile – Diego the unstoppable sex tortoise who saved species from extinction!! Love the sound track as it just had to be Barry White!! https://t.co/Nl43qLtTTy