Site Where 220 Million-Year-Old Dinosaur Footprint Was Discovered Damaged With Sledgehammers Because, People 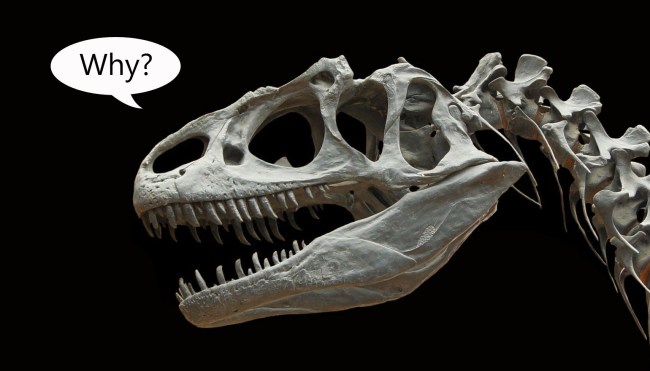 Over the weekend, one of the big news stories was about how a 4-year-old girl named Lily Wilder discovered a near-perfect dinosaur footprint on a beach in Wales that people had somehow missed for 220 million years.

According to a museum press release…

The specimen is a type of footprint called Grallator, although it is impossible to identify which dinosaur made the print 220 million years ago.

The new footprint is just over 10cm long and is likely to have been made by a dinosaur that stood about 75cm tall and 2.5m long. It would have been a slender animal which walked on its two hind feet and actively hunted other small animals and insects.

There are no fossilised bones from this 220 million year old dinosaur, but similar footprints in the USA are known to have been made by the dinosaur Coelophysis which does not occur in the UK.

“This fossilised dinosaur footprint from 220 million years ago is one of the best-preserved examples from anywhere in the UK and will really aid palaeontologists to get a better idea about how these early dinosaurs walked,” added Howells. “Its acquisition by the museum is mainly thanks to Lily and her family who first spotted it.

“During the Covid pandemic scientists from Amgueddfa Cymru have been highlighting the importance of nature on people’s doorstep and this is a perfect example of this. Obviously, we don’t all have dinosaur footprints on our doorstep but there is wealth of nature local to you if you take the time to really look close enough.”

The amazing fossil was supposed to be extracted this week and taken to National Museum Cardiff for preservation and study.

Unfortunately… people exist and since news broke about the amazing find, several areas around the site have been damaged, according to Natural Resources Wales

“Unfortunately, we’ve since been made aware of reports of anti-social behaviour at the site, with people attempting to remove rocks with sledgehammers and crow bars leading to several areas of the site being damaged,” said Nadia De Longhi, south central operations manager for Natural Resources Wales.

I hate this country.

The BBC reports that the footprint itself was not damaged and has made it safely to the National Museum Wales, but the site where the fossil was discovered is still very important for archaelogists to study and contains geological features that require careful site management to preserve them.

Due to current coronavirus lockdown guidelines, only those who live in the area are actually allowed to visit the site.

Removing, damaging or destroying rocks from the site without permission is a violation of the country’s Wildlife and Countryside Act and is punishable by a fine of up to £20,000 ($27,322.80).