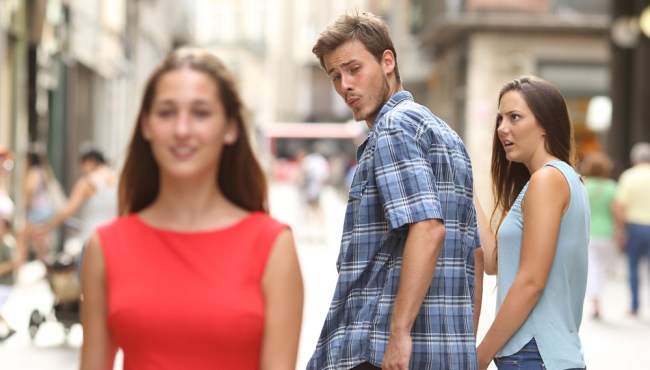 As anyone who had access to the internet in 2017 knows, the Distracted Boyfriend Meme was one of the most popular memes of the year. In fact, it was so popular that, as far as I saw, it was the only meme to receive internet-wide recognition as a Halloween costume.

But what do we really know about these three people in the Distracted Boyfriend Meme photo? Other than the boyfriend is obviously a complete douchebag, I mean.

Welp, thanks to the internet, and more specifically one man on Twitter named Andrew J. Abernathy, we are not only finally getting the backstory to the people in photo, we are also, most importantly, getting some closure… sort of.

After discovering the stock photo while at work, Abernathy soon learned that there were many other photos featuring these people which led to a story that I am sure will soon be optioned into a feature film by someone in Hollywood.

Looking up stock photos for work and I think I found "distracted bf" girl. pic.twitter.com/pU4flzuLDT

After being blatantly disrespected by her bf on the streets, it looks like she is also having trouble with homework. pic.twitter.com/fi0gsecpgQ

Looks like she didn't learn her lesson and they're buying something expensive together. pic.twitter.com/BYwIB1NsDV

That man is a deadbeat and you knew it! Now look what happened. pic.twitter.com/jgnZGT7JxG

What did I tell you? He gone. pic.twitter.com/z6C0Lh0D6w

Doesn't look like they're keeping whatever expensive thing they bought together. pic.twitter.com/EejH87Hy3k

Things aren't looking up for her right now. pic.twitter.com/Mg4ei6Dltv

Why are you surprised?!?! The man showed you what he was! pic.twitter.com/8CjXtH9WYE

The red flags just piled up and piled up didn't they? pic.twitter.com/JslCA38kZO

TBH, this is pretty egregious. pic.twitter.com/tWZkKU6PE4

You better not take him back. pic.twitter.com/ct0n0QmptQ

WHAT COULD HAVE TURNED THE TABLES?! pic.twitter.com/CavujTi401

Oh boy, scandalous. Next photo has a warning on it.

Girl. After this? Zero excuses! pic.twitter.com/dEmSH58dgf

UH OH that expensive thing they bought was a house! I was afraid of that! pic.twitter.com/L31TPfcIjP

Things are looking real bleak for this woman. She needs @SupportiveDude stat! pic.twitter.com/8APbX9QYIB

JUSTIFIED. Too little too late though pic.twitter.com/m3L8TraW73

This is REALLY detailed for a stock photo… pic.twitter.com/gx4Qpm7T7r

Wow. These two… they really need to go their separate ways. Unfortunately, according to Abernathy, it doesn’t appear that this is going to be happening anytime soon…

By the way, I'm not kidding here. There are 40+ pages of these two living their best/worst lives together. pic.twitter.com/MOyt5tpvTB

I could spend the rest of the day on this because I've only gotten through 14 of the 44 pages these two have together. There might be an "attempted murder" photo by page 30! I'll leave on this one.

GIRL YOU KNEW WHAT HE WAS!! pic.twitter.com/PcEAJKMNHa

Maybe… just MAYBE… considering the fact that there are 30 more pages of photos of this couple someone else out there can piece together a happier story for these two kids.

And if they do, we are so here for it.