For The Love Of Everything Holy, Do Not Ban Alcohol On Flights 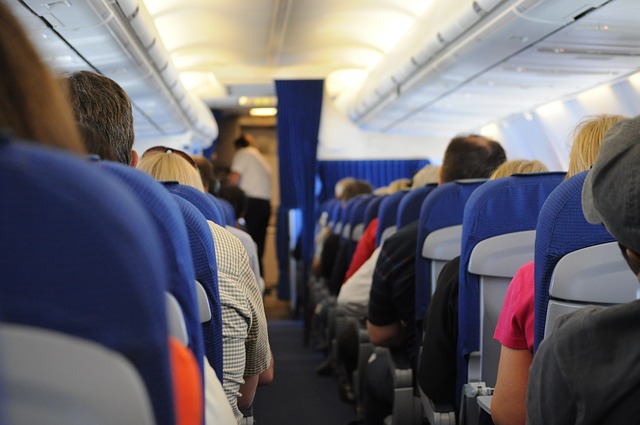 If there is one thing about traveling around this planet by plane that makes it a little more tolerable than the hellish nightmare we all know it can be, it’s that there is always the option of buying overpriced booze at 30,000 feet. Even now, with the real threat of catching every vile sickness known to man from the common cold to the coronavirus, most travelers will tell you that getting hammered while being shuttled across the sky at shit-whipping speeds is the only thing keeping them from touching down at the end of the line without being charged for murder.

For those who travel extensively, like they’ve been perpetually on tour with Led Zeppelin for the past few decades, just the rattle of the alcohol cart making its way down the aisle during a six-hour flight sparks a level of happiness unmatched by anything except maybe getting the new issue of Hustler Magazine in the mail. Listen, it might sound miniscule to some, but the words, “Would you like something to drink?” can make all the difference in the world between a man about to fall apart at the seams and one who just wants to catch up on some Netflix.

We only mention it because, for the past year or so, there has been a lot of disturbing chatter coming from the airline industry about the possibility of eliminating alcoholic beverages from its service repertoire. And all because a few classless lightweights can’t seem to hold their liquor.

Some say drunk and belligerent passengers are becoming a real pain-in-the ass in this day and age. These are presumably the travelers who hang out in the airport bar for several hours during a layover and then get on their flights two sheets to the wind. Most of these people, however, aren’t puking up their guts before stepping aboard the plane, and they sure as shit aren’t looking to fight the guy who mistakenly took their seat. A large percentage of airport boozers are real professionals, not to be taken down by a few or five swigs of the old pre-flight swill.

It’s the reckless few that are really trying to steal the show. There have been several bat-shit-crazy incidents to unravel over the years as a result of these airborne lushes. Some are getting a bit handsy with the flight crew, others are getting violent, while a handful are even trying to bail out of the plane mid-flight. Like, holy hell, I’ve never been drunk enough to want to go skydiving without a parachute. I don’t even think I’ve ever considered going on a Geronimo from the couch as a result of a few too many. And this coming from a man who once woke up unexpectedly on a park bench in Nashville, Tennessee – 300 miles away from home — after 15 beers and a bottle of Mad Dog 20/20 got away from him. And no, as far as I can tell, I didn’t drop into Music City in the middle of the night like a drunken paratrooper.

But where booze and flights don’t seem to mix is when the flight crew tries to cut off those red-eyed beasts on a real savage bender. That’s when the shit really hits the fan. In fact, a couple of years ago, some ass hat threatened to stuff a flight attendant into a “body bag” for refusing to serve him four drinks during a two hour flight. The report didn’t specify whether this fool actually had a plastic vessel for toting a corpse stuffed inside his luggage, but from what we can tell, just the mention of it was enough to make everyone a little nervous. Other alcohol-related incidents have gotten pretty hairy, as well. There have been a few that resulted in full-blown knock-down-drag-out brawls – UFC, there’s an angle to consider — and others that have resulted in sexual assault. Yes, as insane as it might sound, flight attendants are apparently getting raped in the clouds after refusing to serve more booze to already snookered passengers.

It’s why many of them want it banned.

Come to think of it, this is probably the reason the flight staff often looks at me funny whenever I order two beers at a time. They’re likely over there thinking, “Oh boy, this little bastard is ready to tie one on, better watch your ass girls.” And they would be correct in their assumption. I am typically prepared to catch a decent buzz when I fly, just not so much that I turn into Ted Bundy with a splash of Jack the Ripper. Hell, one of my favorite aspects of airline travel is all of the socially acceptable drinking that takes place before and during the flight. It’s how I make new friends while I’m on the road, and it brings a certain level of calm to the fact that I’m being crammed into a jet-powered tube with a bunch of strangers, and we might not make it out alive.

Sure, they say air travel is safer than hitting the road by car. But all one has to do is take a look down from the window seat in a plane to see that, clearly, nobody is making it out alive if the fucking ship goes down. So, we drink to calm our nerves, and then we drink some more – sometimes just for shits and giggles. Most of us do this, according to a recent survey by Fractl. Around 8 out of 10 passengers consume alcoholic beverages in the terminal while waiting for that voice from a member of the flight crew to say something like, “Now boarding groups A and B.” Another 90 percent get on the sauce once they board the plane. But lo and behold, it’s the millennials who are out there causing all of the drunken ruckuses, the survey finds. These bastards are reportedly 10 percent more likely to board a plane all fucked up than the older generations.

Still, the concept of wiping the alcohol cart from our travel escapades is just as absurd as it comes. Because here’s the thing: The airlines are never going to be able to stop boozehounds, drug fiends and all-around assholes from unleashing their fury when it comes to the surface. These wild fuckers are going to find trouble, cause chaos, finger motherfuckers and do all sorts of despicable shit regardless of whether a flight attendant sells them an $8 beer or not. These are the people who are destined for the middle, the deep, deep down of the American cesspool known as the fucking bottom. Incidentally, these are the same imbeciles who think Corona beer is somehow linked to the coronavirus. They are part of the dunce population who thinks that only homosexuals get AIDS and that they are no longer safe in helicopters because of what happened to Kobe.

The majority of us, however, can and will keep it together — just the same as we do while we’re out on the town.

But we can sense where this issue is heading, and it’s not good. Remember, there was once a time when smoking was allowed on most flights. But, as with anything, get enough people to start bitching and moaning about something and, all of a sudden, our creature comforts are being taken away. So, it is conceivable that we could see a time when more airlines are going alcohol-free as a way to keep flight crews from getting harassed. We certainly hope they reconsider, though.

Because if we have to sit tightly packed in our seats for hours on end, coming down from the buzz we got in the airport bar, while kids are screaming in our ears and chatty passengers are trying to become our new best friends, well, all we can say is that’s when the real trouble will begin. Drunken idiocy doesn’t have anything on high anxiety mixed with the weird and socially inept. A month or two of that shit, and not only would booze service be reinstated, it would be complimentary.