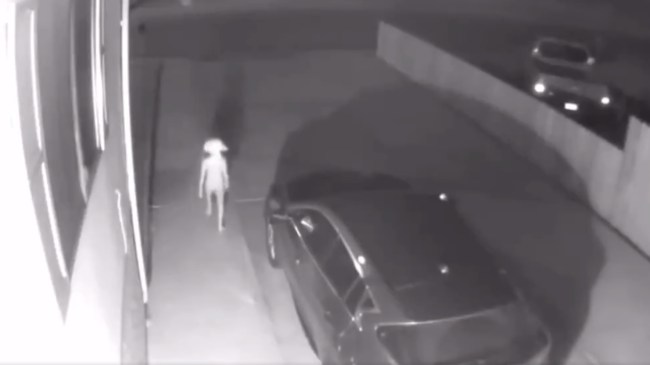 “Dobby” is trending on Twitter and was added to the social media’s site’s “Moments” section after this security camera footage shows a shadowy figure traipsing down someone’s driveway. The person or creature appears to have huge ears much like Dobby.

a lady posted this and said she saw this on her home camera this morning. what y’all think this is ? pic.twitter.com/L98wckn6bO

Immediately, Harry Potter fanatics declared that the video was proof that Dobby the Elf was alive and exists in real life. Harry Potter zealots screamed on Twitter, “Dobby is a free elf!”

DOBBY IS A FREE ELF

Other tweets made Harry Potter references.

dobby boutta get his ass beat for getting caught on muggle footage pic.twitter.com/rlNZ2Hw3Lx

dobby walking out of the malfoy manor to warn harry pic.twitter.com/ZgZT3GafWS

Everyone saying this is fake because he disappears in the last frame is wrong. OBVIOUSLY DOBBY APPARATED OUT OF THERE. https://t.co/UguBeSsvSm

Dobby when Harry gave him the sock pic.twitter.com/RSkGQ1vBX1

Dobby: I’m a free
fucking elf bitch.
Try me in these
streets one more Lucius: ok
time; I fucking who tf gave
dare you hoe you a sock pic.twitter.com/qL04csZwQR

But does Dobby really know how to do the Chicken Dance or is he just drunk AF?

I swear that thing just did the chicken dance.

Meanwhile, other commenters decided that the ominous creature was a solid reason to never go outside at night ever again and that maybe it was an alien.

Everyone joking that this Dobby but i'm here deciding not to go outside at night ever again pic.twitter.com/G8tBVawmRo

Dobby or alien? You can’t tell me aliens aren’t real after this! pic.twitter.com/iIW2D4Qr5h

Then there were some people who thought that Dobby was trending because J.K. Rowling was revealing the house elf’s sexual preferences during Pride month, which the Harry Potter author was ridiculed with memes and jokes a couple of months ago.

Ngl when I saw dobby trending in pride month I thought jk Rowling said something again that shouldn’t be said pic.twitter.com/YlzEarg6Mo

JK Rowling: Yes and he’s non-binary trans! It was in the book the whole time! How could you miss it? pic.twitter.com/Dd8IVgc88Y

The grainy video was shared by “jey bee” – @jadynbee_ and racked up over 14 million views, 53,000 RTs and 165,000 Likes. The original person who posted the video was Vivian Gomez. On June 6th, she shared the creepy home security video on her Facebook page with the caption: “So I woke up Sunday morning and saw this on my camera and am trying to figure out…what the heck?? First I saw the shadow walking from my front door then I saw this thing….has anyone else seen this on their cameras?? The other two cameras didn’t pick it up for some reason.” The video has more than 5.3 million views, 29,000 reactions and 103,000 Shares.

So what says you, is Dobby the House Elf alive and trespassing on someone’s property or is there an alien walking amongst us?