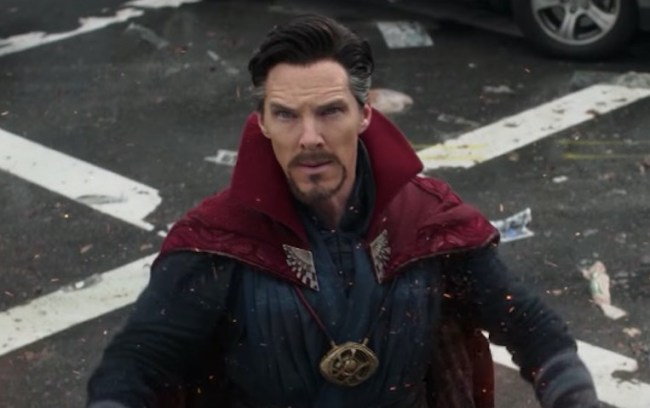 It’s FAN THEORY time, and that means there are some potential SPOILERS AHEAD for anyone who hasn’t seen Avengers: Infinity War. Obviously, Captain Marvel starring Brie Larson hasn’t hit theaters yet so this is all speculation, but we can make some informed guesses on the future of the MCU based on what happened in Infinity War.

This fan theory via Reddit attempts to connect the dots between Dr. Stephen Strange, Captain Marvel, Nick Fury, Nick’s beeper, and Thanos wiping out half of the population in the universe. It all focuses around the scene before Dr. Strange, Tony Stark, Peter Parker, and Peter Quill/Star-Lord took on Thanos.

My colleague Andrew Roberts at UPROXX sets this up well:

His sacrifice of the Time Stone for Tony Stark’s life and his look into all of the possible futures create some possibilities for the next film. Seeing how Strange has used the Eye of Agamotto to control time in his own film, changing the outcome of Dormammu’s invasion in the process. The point here is that he controlled time and even though his moment in Infinity War seems short, it could represent an infinite amount of time for Strange to do whatever he needs to do to ensure the one time the heroes win against Thanos becomes a reality.

Now that we’re all up to speed, here’s the fan theory that could connect Dr. Strange and Captain Marvel, the powerful character we’re all banking on to save the MCU next Summer:

Doctor strange knows what happens in the future, he sets it up in fact. He knew that Thanos had to snap his fingers at that exact right time and under all these certain conditions for them to win. He’s setting up Captain Marvel’s return to Earth. I believe he’ll appear in the CM movie and tell Fury it is vital for him to carry around with him the pager to contact Captain Marvel. Nick Fury, knowing about Steven Strange lists him as an ally to shield which of course is how Hydra knows about him despite him being a neurosurgeon (anyone who is an ally of SHIELD is a threat to HYDRA). He warns him of an event in the future refering to the people turning to dust without warning, this is why Fury’s instant reaction to seeing Maria Hill turn to ash was to run to the pager, but what our good friend Sorcerer Supreme didn’t mention was the fact that he does not survive hence the “Mother Fu…” at the very end. We should also take note that the way he says it isn’t paniced or scared, he’s confident that Strange knows what he’s doing. (via reddit)

As far as fan theories go, this one legitimately seems like it’s filling in the blanks by connecting dots more than it’s just making shit up to fit a storyline. Maybe I just want to believe this will all come to fruition because I’m not willing to accept that Doctor Strange is dead for good. He’s my favorite character in the MCU and his standalone film was my favorite thus far. The thought of him playing an integral role in next year’s Captain Marvel is exactly the type of theory I want to believe.

For more on this, you can click here to visit UPROXX.