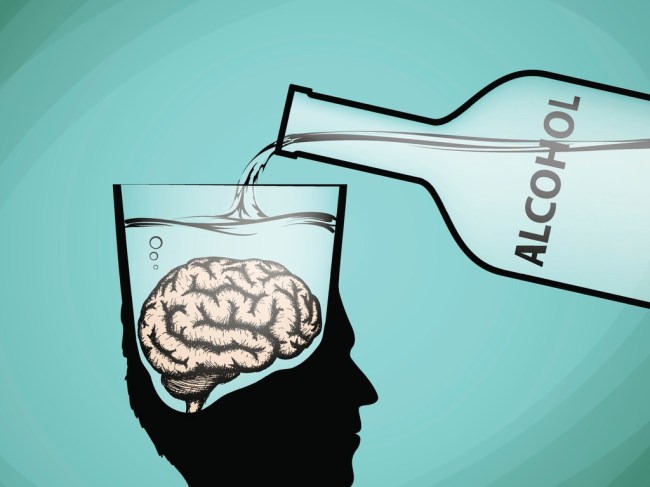 In our formative years, health education teachers tried to scare the holy-living bejeebus out of us by suggesting that all of the pleasures we would soon find in life – the sex, drugs and rock n’ roll — would somehow, someway come back to haunt us with a hellish vengeance. To prove their point, these textbook weirdos would make us watch poorly produced videos with lame titles like “Sex and You” or some shit. These films often chronicled the miserable existence of one or two weasel dick teens from the mid-70s whose dongs were probably going to end up looking like the Toxic Avenger by the end and all because they done went and loved up the wrong girl.

Similar fright fests followed throughout the school years, some of which were designed to sell the downright rotten perils of getting high on drugs. The films, most of which were produced by the federal government’s propaganda machine, were aimed at frightening the youth of America into thinking that so much as dabbling in marijuana and other feel-good substances would almost ensure atrocities to the DNA of the popular crowd.

Perhaps Chad, a local legend and basketball all-star, would smoke weed one night with the prom queen, and in turn the two would produce a curtain climber that would need to be carted off to school on the short bus. Or maybe they’d both end up living as derelicts inside a cardboard box outside the Gas N Goodies, instead. Who really knows? The potential horrors of getting stoned and boning were absolutely endless.

And when it came to alcohol, rest assured the insanity wasn’t any less ridiculous simply because they were teaching us about a legal substance. One thing was certain, Uncle Sam didn’t want us drinking.

The primary reason was that every time we took a swig of the sauce, we’d be killing off thousands of brain cells and catapulting ourselves further into the pits of downtrodden. Then, who would be left to pay taxes? So, unless we wanted to end up becoming washed up pieces of shit like our alcoholic fathers, we just needed to say no and embrace God and country as our savior.

Of course, those of us who had already stolen a few beers from our father’s tool shed could be seen doing the math in class. I remember thinking: “Uhm, let’s see, we’ve got somewhere around 100 billion brain cells, take away 25,000 or so – yep, that’s still plenty to keep us alive and kicking well into our twenties.” Fuck no, we weren’t scared. Most of us knew that it wasn’t going to be until we cracked open our 1 millionth beer or so that we’d go down for the count. There was plenty of time to get hammered daringly into the night before jumping on the wagon to dry out.

Yet, now, as more of us have miraculously survived the hangover years and are now venturing into our thirties and forties, we’d be willing to bet our left nut and a six-pack that most of you hellraisers of yesteryear have probably lost track of how many brain cells are left rattling around inside of those Kenny Noggins of yours. Some of you have probably even been awakened by night terrors at some point or another, all sweaty in a state of panic and regret, screaming something like, “My God, why did I spend so much time funneling gallons of Bud Light and Zima?”

Side Note: Admittedly, those of you who fall into the Zima category get what you deserve.

Some of you wild cats, though, rode the hard liquor train like a borrowed mule. Those who haven’t already been ushered into the great beyond by the hand of Saint Cirrhosis probably don’t even want to think about how many brain cells they’ve pissed away on the sauce. After all, one more lucid thought might be all it takes to be reduced to a hairy vegetable man that has no choice but to spend the rest of his days sucking down fruit cocktail through a straw and pissing into a bag.

Well, stop worrying so much. We’re here to tell all of you beer-bellied fraidy-cats that it’s not the booze that’s killing your brain cells. Nope, contrary to the loads of bullshit spewed by the health educators of our younger years, science has concluded that alcohol does not actually snuff out the neurons that keep our brains functioning. Sure, over the years, some studies have shown that brain cells die when we consume alcohol like maniacs, but the latest, and most consistent research we have on the matter indicates that these cells are not drowning in our drunkenness.

Now, of course, this doesn’t mean that years of heavy drinking isn’t a detriment to the old thinking cap. Because it certainly can be. Medical experts, like Benjamin Springgate, MD, MPH, associate professor of clinical medicine at the Louisiana State University School of Medicine and Public Health, says that while brain cells aren’t dying from alcohol abuse, they are still taking a beating.

“Just because alcohol doesn’t actually kill brain cells, it doesn’t mean it doesn’t affect them,” Springgate explained in the journal MDLinx. “Studies have shown that drinking alcohol can damage the ends of brain cells, which affect how they communicate with one another and how your brain works. Long term heavy drinking can not only shrink the size of brain cells and affect coordination, sleep, and memory, it can result in enough damage to result in coma and even death.”

We hate to admit it, but it appears that knocking back the bottle with any kind of enthusiasm at all is probably not the healthiest regimen for our brains. Over time, this habit can chisel away at our ability to remember shit, solve problems and destroy our focus. It’s not so much that this damage only comes to those boys and girls who really pour it on regularly, but the droves of weekend warriors out there getting turned up a night or two can suffer the wrath, as well. Yep, even moderate drinking can whittle away at the brain enough to turn someone into a slobbering imbecile before the Grim Reaper comes-a-knockin.

Now, if you’re curious about how much booze is safe to consume before you start jibber-jabbering around town like the Peanut Butter Falcon, well, that all depends on the individual. It could mean four drinks per day, some research has shown. It could, however, mean as little as two. No one really knows.

Sorry dudes, drinking is a crapshoot at best.

Yep, now we’re over here doing some new math. Like, just how much longer are we going to be able to get liquored up the way we like to without being forced to wear a diaper or have a home health care worker come to visit us every day? Well, dear friends, if one of you smarty pants can come up with that much-needed equation, we’d be eternally grateful if you’d share it with us. We can’t even balance our bank accounts these days with any real accuracy, much less come up with some algebraic code that shows the cut-off point for our booze-soaked shenanigans.

It’s funny, too, considering that we still haven’t come anywhere close to drinking that 1 millionth beer we were talking about earlier. Don’t even crack, because that shit is harder than you might think. Come to find out, a person would have to consume around 60 beers each day for the next 50 years to hit that number. It would be impossible to achieve without dropping dead of liver failure. But that doesn’t mean that one of you crazy fuckers aren’t still out there trying.