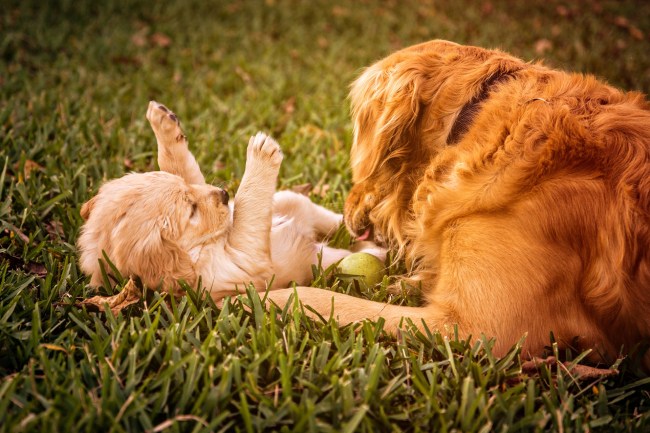 Hey you. Yes, you. Take a moment to enjoy this news and stop thinking about everything else for just a minute. Your stress levels will thank you.

Finley Molloy first made headlines months ago when the dog set a new world record for ‘most tennis balls held in a dog’s mouth’ at an unfathomable six tennis balls at once. But it took A LONG time for Finley to be awarded the official Guinness World Record with all sorts of bureaucratic nonsense and pencil-pushing holding up this dog’s ascension to legendary status.

Well, the wait is over and we can finally praise Finley Molloy, a 6-year-old Golden Retriever from Canandaigua, Ontario County, for holding six tennis balls in his enormous mouth at once. Here’s Finley Molloy in action:

Finley has amassed almost 37,000 Instagram followers thanks to his Guinness World Record-setting mouth. My Bernese Mountain Dog doesn’t even give the slightest attention to tennis balls but I grew up with Labrador Retrievers and am well acquainted with some dog’s all-consuming obsession with these tennis balls. Finely Molloy was able to turn his passion into a Guinness World Record, something we should all aspire to achieve.

After submitting various pieces of evidence for an extensive application process that stretched out for more than a year, Finley’s family received an email last week confirming that all their hard work had paid off.
“It’s just so exciting,” said Erin Molloy, Finley’s human sister.
“When I look at him I’m like, ‘I want to squeeze you, I love you so much!'”
Though Finley never seemed to mind the process, his family’s relieved that they no longer have to remember to pull out their phones and record when he starts picking up tennis balls in the backyard.
And that, Molloy said, was certainly worth celebrating.
Naturally, a socially distanced “pawty” was in order.
Finley’s family got a cake from BONES Dog Bakery in Rochester and invited the neighbors and some of Finley’s closest dog pals over to hang out in the yard on Sunday. (via USA Today)

I’m sure Finley would love it if you’d throw him a follow over on the ‘gram and help him make it to 40,000 followers. And while you’re at it, you should all be following @BroBible on Instagram if you aren’t already.