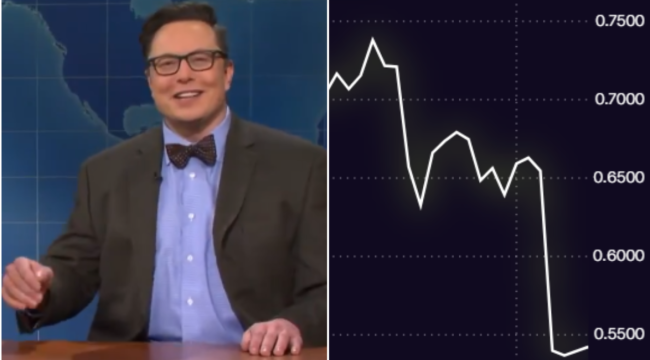 It seems like Robinhood, the popular online brokerage app, wasn’t prepared to handle the volume of trading during Elon Musk’s appearance on Saturday Night Live.

On Saturday, Musk who has dubbed himself “Dogefather”, talked about Dogecoin in front of a national TV audience during a skit on the show.

here’s a clip of elon musk explaining what doge coin is on SNL….he said it’s a hustle 😂 pic.twitter.com/iyXbKH0FPZ

Dogecoin’s price plummeted from .70 to .55 cents, losing $18 billion in market share during Musk’s appearance on SNL.

Dogecoin gets the Elon Musk mention on SNL then plummets. Goes from 70 cents to 55 cents, losing $18 billion in market share in less than 20 minutes https://t.co/laZY2s30DW

this is the funniest part of snl tonight pic.twitter.com/m5iBofzcpG

Robinhood’s servers went on to crash and wouldn’t allow users to buy/sell Dogecoin on the app.

Users of the app were furious considering Robinhood had similar issues during the “meme stock” craze earlier in the year.

#Robinhood looking at the same people who threatened to leave the app the other 20 crashes complain again pic.twitter.com/2TDEZ8twDe

Robinhood locking up trading on Dogecoin at the pinnacle of its memedom on national TV is proof we are living in a simulation.

Part of this #dogecoin crash was that robinhood went down.

Like I really can't say it enough, don't use Robinhood. It has a nice UI and nice setup UX. But as a trading platform its so bad.

Robinhood after telling you “There was an unexpected server error. Please try again later.” pic.twitter.com/rrtduYlH59

We will be looking forward to the #Robinhood Class Action Lawsuit pic.twitter.com/yfbe0qxHAF