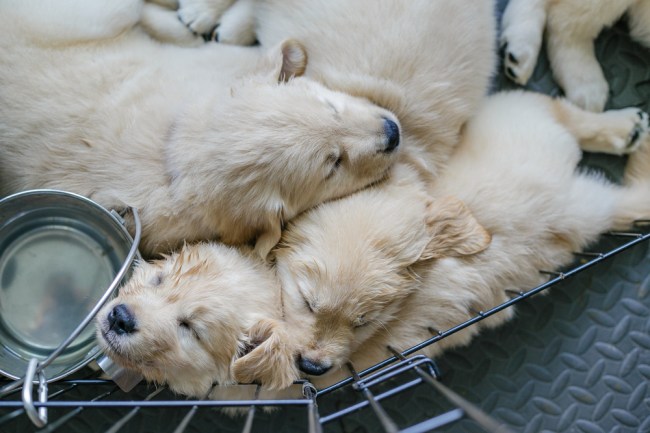 Whether your dog wasn’t able to bite the rump of a mailman running away or their favorite squeak toy stopped squeaking or they were thirsty and the toilet seat lid was down, pooches encounter stress no matter how much of a good boy they are. The stress of their human only remembering their birthday every seven years can take its toll on a doggo and even affect their sleep. A new study has found that dogs struggle to sleep after having a stressful day. Dogs, they’re just like us!

Scientists in Hungary monitored the brain activity of 16 pet dogs, including Labradors, a Jack Russell and a sheepdog, over three hours. In one round of tests, the dogs were subjected to brief positive experiences like playing and petting, while the next was negative and involved being separated from their owner or stared at. The dogs were then allowed to go to a sleeping place. The researchers found the dogs tended to fall asleep more quickly after the negative experience, an apparently protective response to escape from their stressful feelings. Dogs that experienced negative treatment also spent more time in the REM stage of sleep, when the brain is more active, meaning less time in the deeper stages.

Who wouldn’t lose sleep when you don’t want to drop the tennis ball in your mouth, but you also want your human to throw the ball for you to fetch.

“However we found dogs get less deep sleep after a negative experience, said Dr. Anna Kis, of the Hungarian Academy of Sciences. “It suggests that, just as humans have a bad night’s sleep after a difficult day, dogs may have a similar problem.”

Poor doggos, must be super stressful to have too many dog toys and never know which one to play with.