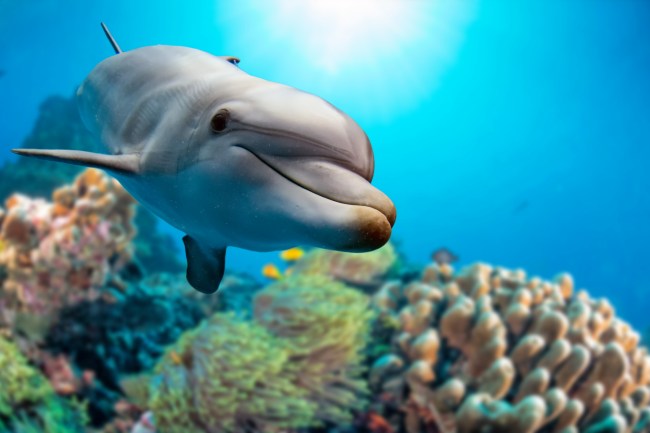 You might’ve been bummed out over the past few months but we’re not here to talk about you, we’re here to discuss the depressed dolphins in Australia who miss human contact so much they’re dropping off gifts to try and persuade people to go swimming again.

It’s hard to say for certain why these dolphins are bringing coral presents to people in Australia because it’s not like we can just ask them ‘hey, is this piece of coral because you miss us so much?’ and the dolphin would be like ‘why else would I be giving you such a noble gift if it wasn’t because I miss your musk?’ After all, dolphins can’t speak. So we’re left to fill in the dots here and assume the gifts are because they miss us so much.

It’s not just coral, either. The pod of humpback dolphins in Queensland, Australia has been visiting Barnacles Cafe & Dolphin Feeding at Tin Can Bay where it’s been weeks since they dolphins have had any human visitors due to restrictions tied to the global health crisis. These dolphins are dropping off gifts in hopes the humans will start swimming again, according to 7news:

Dolphins in Australia have been bringing gifts of coral to shore because they are missing interacting with visitors.

The humpback dolphins usually mingle with visitors at Barnacles Cafe & Dolphin Feeding at Tin Can Bay, north of the Sunshine Coast.
But it’s been weeks since visitors lined up to feed the animals due to coronavirus restrictions.

Among the treasures the marine creatures have provided are sea sponges, barnacle-encrusted bottles and pieces of coral.
“The pod has been bringing us regular gifts, showing us how much they’re missing the public interaction and attention,” said a post on the cafe’s Facebook page.

“They are definitely missing you all.”
A volunteer told the ABC while the pod has displayed the behaviour before, it had increased while the venue was closed. (via)

Dolphins in Australia have been bringing gifts of coral to shore as a way of interacting with visitors. This #dolphin has formed a habit of bringing visitors gifts from the bottom of the ocean just proves how well they have learned to co-exist with us. pic.twitter.com/y5NwxaK8g8

Dolphins who frequent Australia's Tin Can Bay, a popular tourist spot, have taken to bringing "gifts" ashore, apparently missing the visitors who would normally be lined up to feed them before the coronavirus pandemic. #TeamWorldSupporter pic.twitter.com/YsHAI5Iife

One expert says it’s unlikely the dolphins actually miss humans and what the dolphins more likely miss is the free meals and routine socialization. But there’s no way to prove these dolphins don’t miss people and just want free meals so I think we’re all safe believing they miss people.

“They do everything – they use tools, they have culture, they have something similar to names in signature whistles.
“In all likelihood, they probably don’t miss humans per se. They probably miss a free meal and the routine.”

He speculated it may be a “play-like behaviour”.
“They often play with bits of weed and coral and all sorts of things and just leave it on their rostrum (nose),” he said.

“They’re used to getting fed now, so they’re used to humans coming in.
“When it’s not happening, maybe it’s just out of boredom.” (via)

For more on this story, you can click here to visit 7news.