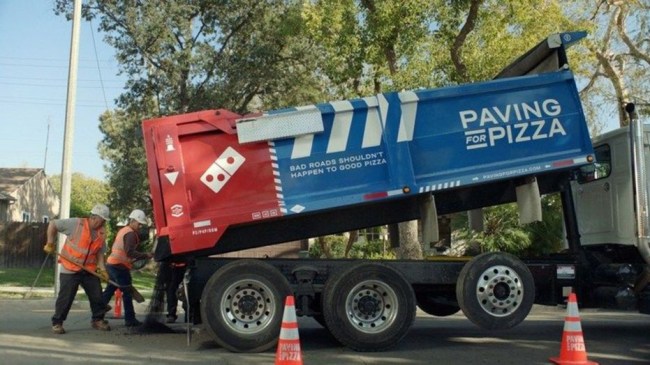 For as great as America is, we have an embarrassing infrastructure. In the last two report cards from the American Society of Civil Engineers back in 2013 and 2017, the U.S. infrastructure was given an abysmal grade of D+. For roads in general, it was even worse, with the United States having a grade of D last year. These dreadful driving surfaces result in more car repairs and higher chances of vehicle accidents. Crappy roads also mean that a nasty pothole will devastate your pizza while it is being delivered to you. A catastrophic condition that Domino’s has vowed to put an end to.

Domino’s realized that nobody is actually doing anything to remedy the awful infrastructure ills so they decided to remedy the bumpy problem themselves. Domino’s put their money where their mouth is and started an initiative called Paving for Pizza.

“Potholes, cracks and bumps in the road can cause irreversible damage to your pizza during the drive home from Domino’s,” the pizza purveyor said. “We can’t stand by and let your cheese slide to one side, your toppings get un-topped, or your boxes get flipped. So we’re helping to pave in towns across the country to save your good pizza from these bad roads.” Cheese slides are the WORST, especially when somebody nabs the over-cheesed slice and you’re left with a naked pizza crust that has no cheese and barely any sauce.

“Have you ever hit a pothole and instantly cringed? We know that feeling is heightened when you’re bringing home a carryout order from your local Domino’s store,” said Russell Weiner, president of Domino’s USA. “We don’t want to lose any great-tasting pizza to a pothole, ruining a wonderful meal. Domino’s cares too much about its customers and pizza to let that happen.” This takes on a whole new meaning to pavement pizza.

Domino’s has already fixed more than 200 potholes in four U.S. cities: Burbank, California; Milford, Delaware; Bartonville, Texas; and Athens, Georgia. If your city has garbage roads that your local government refuses to fix you can actually request that Domino’s come and fill your potholes. You can nominate your town on Domino’s Paving for Pizza website. If your town is selected, “the city will receive funds to help repair roads so pizzas make it home safely.” Your pothole isn’t filled in 30 minutes or it’s free