Don Cheadle Recalls Partying In Amsterdam With George Clooney, Brad Pitt, And The Cast Of ‘Ocean’s 12’ 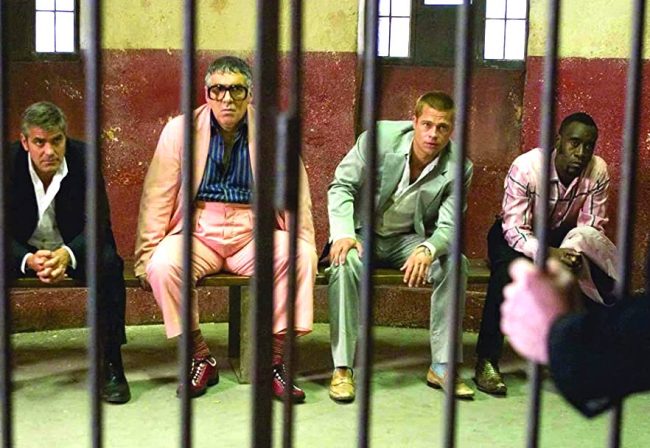 Back when I was younger, and really, still to this day, Steven Soderbergh’s Ocean’s trilogy stood as a pillar of *cool* with the likes of George Clooney and Brad Pitt wearing slick suits and traveling the world and robbing people blind and looking handsome as hell while doing it.

Obviously, that was the intentional design of the Ocean’s trilogy, as they’re merely a remake of the 1960’s classic which started the legendary Rat Pack — Frank Sinatra, Dean Martin, Sammy Davis Jr., Peter Lawford, and Joey Bishop — who are, more than anyone else in the history of American pop culture, the definition of cool.

Earlier this week, I had the chance to interview the legendary Don Cheadle, who starred as Basher Tarr in Ocean’s 11, 12, and 13. But, instead of asking about the actual filmmaking, I opted to enquire about what it was like to, more or less, simply be a cool actor filming those sort of films, especially considering the locations they filmed at.

“Oh man, there’s so many,” Cheadle said when asked about the first memory that comes to mind when thinking of his time shooting the Ocean’s trilogy.

“All of us coming together in Europe to shoot the second one, which is the one people feel with completely no compunctions to come up to you and say, ‘I didn’t like that one.’ It’s like, that’s cool, you didn’t have to @ me when you said that.”

“All of us getting to come back and the amount of time we’d been away from each other. People had gotten married, they had had kids, families — we were all together in italy. The reunion and the real familial feel those movies have. You can tell we’re all having fun and I think that’s the magic in those movies in that it doesn’t feel forced or manufactured. You’re like ‘I bet those guys really like each other.’”

When pressed if there was one specific night he remembers (or, in fact, barely remembers), Cheadle admirably held his ground, although he did emphasize that they shot in Amsterdam, the famed weed capital of our little third rock from the sun.

“Well, there is… There are several nights,” he replied when asked if there was *one night in particular* that sticks in his memory. “We did shoot in Amsterdam… so, we’ll leave it there.”

You can catch our full interview with Mr. Cheadle — where we discuss the Ocean’s films, trading fists with Jackie Chan, his future in the MCU, and more — when the newest episode of the Post-Credit Podcast drops tomorrow. You can also catch the iconic Academy Award-nominated actor this Sunday during the Super Bowl, where he’ll be starring in a mind-blowing, doppelganger-filled Micelob ULTRA spot.