Dr. Fauci Has Officially Put A Hit Out On Handshakes 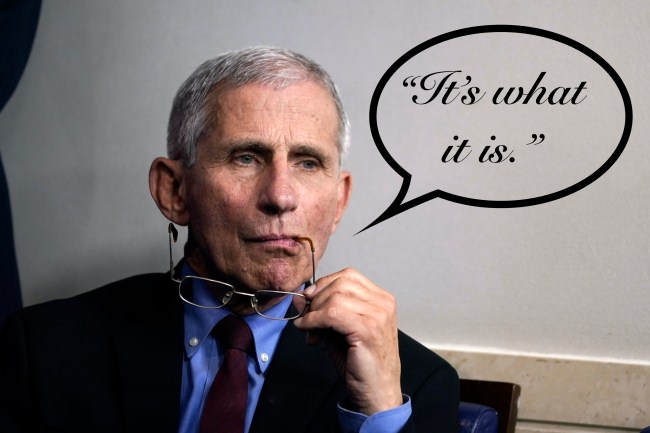 Well, polite societal norms, it’s been a fine run. All good things must come to an end. If Don McLean wrote “American Pie” about the day Buddy Holly died, then perhaps Sturgill Simpson or whoever can pen a tune about today — The Day The Handshake Died. Before we go any further, though, let’s cue the soundtrack.

It goes without saying that I, like all of you, respect the absolute hell out of New York’s own Dr. Anthony Fauci. When it comes to a figure in the federal government guiding us through this current situation, he is the one we should be listening to. The man is the nation’s foremost expert in his field and has put forth a lifetime’s worth of public service. He’s a hero.

But he’s also a little Italian guy so, therefore, my broken ass quarantined brain immediately pictured Fauci as a Joe Pesci-like character in a smokey whiskey-soaked backroom of some fancy club letting the President and the other powers that be know he’s making it official: he’s puttin’ the hit out on handshakes.

Fauci leans in closer. “I been meanin’ ta talk to yous all about something.” He’s a quiet guy, but when he uses that raspy voice of his to speak up, you make sure those fat ears a yours perk up.

“Handshakes, they’re done. Half-a-million dead. Million flat alive.” The table, despite being in the midst of a racous club, went dead quiet. You could hear the rats fuckin’ in the walls and the ladies doing key bumps in the bathroom it was so still in there.”

“But, Doc…” one poor brave soul whimpered from the corner. “Handshakes are everything where we come from. We been together for centuries. Deals and agreements, wedding and funerals… they’re made with handshakes.”

“It’s what it is,” he whispers, dragging from him fresh-off-the-boat Cuban as his priceless golden ring from 1930s Italy glistens under the hazy club light. Handshakes were dead already and they didn’t even know it.

In all likelihood, considering he is such a smart guy, he probably knows that socially-banning handshakes is just never going to happen bar some sort of true zombie-apocalypse-esque contagion. He’s just saying that in his ideal, science-and-medicine-driven view of the world, handshakes are a thing of the past:

“I don’t think we should ever shake hands ever again, to be honest with you. Not only would it be good to prevent coronavirus disease; it probably would decrease instances of influenza dramatically in this country,” Fauci said during an interview with Kate Linebaugh of The Wall Street Journal.

Fauci then echoed that same sentiment in an additional interview with the Sinclair Broadcast Group, saying that as a society, we should “just forget about handshakes.”

In another interview with Sinclair Broadcast Group this week, he made a similar plea.

“As a society, just forget about shaking hands. We don’t need to shake hands. We’ve got to break that custom. Because as a matter of fact, that is really one of the major ways that you can transmit a respiratory illness,” Fauci said.

Coming from a Queens/Long Island/New Jersey Italian family that’s likely quite similar to Fauci’s, I just have a hard time imagining a society where the primary form of greeting someone is tossed out the window. Then again, similar to Jimmy Hoffa and the mob, I should know better than to doubt Mother Nature.