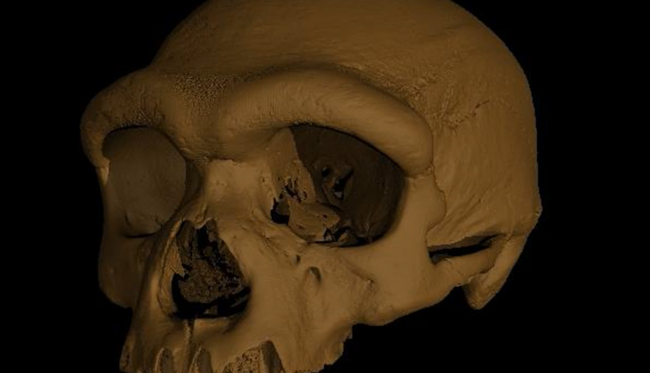 A “Dragon Man” skull discovered by scientists in China could be a new human species and rewrite the story of human evolution.

The skull was found wrapped up in a Chinese well where it had been hidden for 85 years.

Dr. Junyi Ge of the Chinese Academy of Sciences (CAS) said about the discovery in a press release, “Although it is impossible to pin the cranium to an exact location with currently available technology, all the evidence suggests that it was from a bed of water-laid sediments aged between 138 and 309 thousand years ago in the Harbin region.”

Geochemist and team member Dr. Qingfeng Shao from the Nanjing Normal University added, “We are quite confident now that the fossil is older than 146 thousand years.”

“The Harbin fossil is one of the most complete human cranial fossils in the world,” said author Qiang Ji, professor of paleontology of Hebei GEO University. “This fossil preserved many morphological details that are critical for understanding the evolution of the Homo genus and the origin of Homo sapiens.”

Breaking News: Scientists announced that a massive fossilized skull that is at least 140,000 years old may be a new species of ancient human. The researchers named the new species Homo longi and gave it the nickname “Dragon Man." https://t.co/ejyHHl5IGD

The cranium was reportedly discovered in the 1930s in Harbin City of the Heilongjiang province of China. The massive skull could hold a brain comparable in size to modern humans’ but had larger, almost square eye sockets, thick brow ridges, a wide mouth, and oversized teeth.

“While it shows typical archaic human features, the Harbin cranium presents a mosaic combination of primitive and derived characters setting itself apart from all the other previously-named Homo species,” says Ji, leading to its new species designation of Homo longi.

Scientists believe the cranium came from a male individual, approximately 50 years old, living in a forested, floodplain environment as part of a small community.

“Like Homo sapiens, they hunted mammals and birds, and gathered fruits and vegetables, and perhaps even caught fish,” remarks author Xijun Ni, a professor of primatology and paleoanthropology at the Chinese Academy of Sciences and Hebei GEO University. Given that the Harbin individual was likely very large in size as well as the location where the skull was found, researchers suggest H. longi may have been adapted for harsh environments, allowing them to disperse throughout Asia.

Chinese researchers unveil ancient skull that could belong to a completely new species of human https://t.co/Ve5raGIwFG

In the papers published Friday, the researchers argued that Homo longi appears to have been an adult of great size. His cheeks were flat and his mouth broad. The lower jaw is missing, but the researchers infer from the Dragon Man’s upper jaw and other fossil human skulls that he likely lacked a chin. They say that his brain was about 7 percent larger than the average brain of a living human.

The researchers argue that Dragon Man’s combination of anatomical features are found in no previously named species of hominin, the lineage of bipedal apes that diverged from other African apes. They later evolved into larger-brained species that set the stage for Homo sapiens to expand across the entire globe.

“It is widely believed that the Neanderthal belongs to an extinct lineage that is the closest relative of our own species. However, our discovery suggests that the new lineage we identified that includes Homo longi is the actual sister group of H. sapiens,” said Xijun Ni, who provided a virtual reconstruction of the Harbin cranium (below).

Professor Christopher Stringer, a paleoanthropologist at the Natural History Museum, said about the new skull discovery, “It’s distinctive enough to be a different species.”

Stringer added, “Obviously, something doesn’t match. The important thing is the recognition of a third human lineage in East Asia, with its own distinctive combination of features.”

He says the next step in solving this mystery is to obtain DNA from the skull. Stay tuned.