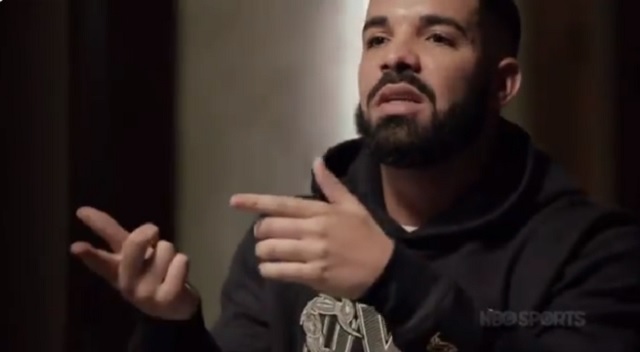 Over the summer Drake got into heated rap beef with Kanye West backed artist Pusha T that led to Pusha dropping an extremely personal diss record “Addidon” where he revealed to the world that the Toronto rapper had a secret son.

Since you name-dropped my fiancée
Let ’em know who you chose as your Beyoncé
Sophie knows better as your baby mother
Cleaned her up for IG, but the stench is on her
A baby’s involved, it’s deeper than rap
We talkin’ character, let me keep with the facts
You are hiding a child, let that boy come homeand yo
Deadbeat mothafucka playin’ border patrol, ooh
Adonis is your son
And he deserves more than an Adidas press run, that’s real

Drake eventually wrote a response to Pusha’s “Adiddon” but never released it for unknown reasons.

Last night, Drake went on LeBron James’ HBO show “The Shop” to talk about how Kanye West set him up and why he never released the Pusha diss record.

Here’s Drake explaining how Kanye had convinced him to share his intimate details while the two were recording a few songs together.

He sold me on this whole speech of like I’m in a great place, I’m making money and I’m a father and I want to be Quincy Jones and help you but in order to do that you’ve got to be transparent with me and you’ve got to play me your music and you gotta tell me when your dropping…

He played me “Lift yourself and he said you could have this if you want…I went to Wyoming and eventually ended up working on his music and cooking up ideas for him. I left Wyoming and we left with “Lift Yourself”

Drake said that he eventually revealed everything about his son to Kanye and even played March 14th while the two were in Wyoming.

So I played him my music and I told him when I was dropping. I was 60 percent done with Scorpion. He told me he was just working on some beats and he wasn’t dropping until October. While I was in Wyoming I played him March 14th and even sent him a picture of my son, I tell him I’m having trouble with my son’s mother.

Kanye went on to randomly release “Lift Yourself” with the lyrics “Poopity scoop, scoopity woop” which caught Drake off guard because he was going to use that song on ‘Scorpion”.

Lift yourself comes out with him just talking nonsense. I was like oh this guy’s toasted, this guy’s trolling me. This was like a manipulative, I wanna break you thing.

Then Pusha released the diss record on his album which again left Drake perplexed.

Drake spoke about how he felt Pusha went too far on the diss record.

People love to say “Hey man there are no rules in this shit”. But there are fucking rules in this shit. I knew something was going to come up about my kid. They had to add the deadbeat thing to make it more appealing which is fine, but wishing death on my friend that had M.S.. I study rap battles for a living, now when you mention defenseless people who are sick in the hospital and have passed away, that really sent me to a place where you know I just believed then and I believe now that there’s a price that you have to pay for that…It’s just, it’s over, someone is going to punch you in the fucking face, the shit’s done, the event’s over I wanted to do other things. I didn’t want to further your reputation or career by rapping back at you and having that exchange. That was it for me.

And finally here’s why Drake says he decided against releasing his Pusha T diss.

I got home and listened back to it and I was like man this is not something I ever want to be remembered for, this is not a place I necessarily want to go ….Hell of a chess move (by Pusha T), the song I thought was trash but the chess move was genius, back against the wall, I either go all the way filthy or I fall back and I have this chink in my armor for the rest of time to a rap purist which is fine, I could live with that. I would much rather live with that than with the research I did and the things I was about to say and the places where I was going to go, not only for him but the other guy too (Kanye)

You can watch Drake’s interview on “The Shop” in the video below.