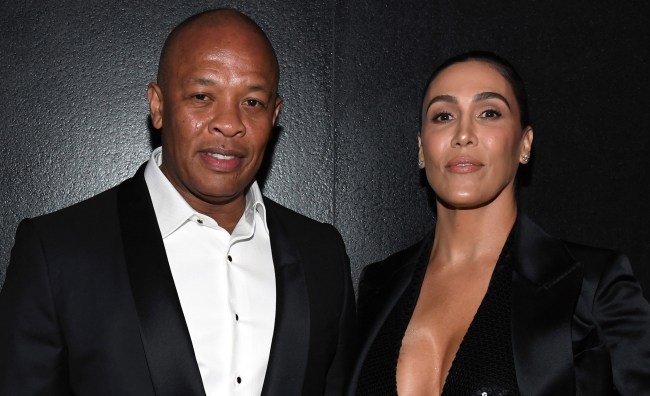 Dr. Dre’s estranged wife Nicole Young, who wants around $2 MILLION a month in spousal support as the couple go through divorce proceedings, claiming that the prenuptial agreement she signed when the couple were first married is invalid because he ripped it up, just filed legal documents claiming he is hiding assets and committed domestic violence against her.

In the documents, Young claims Dre created a solely-owned, brand new holding company and transferred property to it, including the trademarks for “Dr. Dre” and “The Chronic,” in an attempt to hide assets that she believes are “community property,” reports TMZ.

Sources connected to Dr. Dre told TMZ, “It’s the act of a desperate woman who finally realized that the iron-clad prenup she signed doesn’t win her the lottery,” adding, “They were married in 1996. Chronic came out in ’92 and Dr. Dre used his name since the 80’s, so it’s all his and his alone.”

On the flip side, Young says the Dre trademark was first filed in 1997 – after the couple were married – and that his attempt to hide the assets are an “epic failure and reveals the true nature of his character, or lack thereof.”

She also, while not getting into specifics, claims to have been the victim of physical, emotional and financial abuse by Dre throughout their marriage.

Dre’s camp fired back that “there has never been any hint or claim of threatened or actual physical violence and the insinuation is an insult to actual victims of domestic abuse.”

Young had previously claimed in legal documents that her monthly expenses run her around $2,530,000, and that Dre has been controlling all of the couple’s money and won’t even let her use her American Express black card.

On his side, Dre has claimed that Young has refused to turn over his belongings from their Malibu home including his golf clubs.