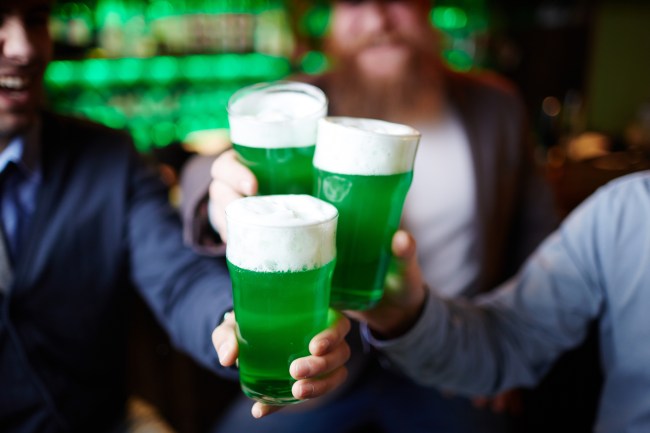 It’s almost that time of year again when some of you will dig in the back of your closet for the t-shirt that reads, “Kiss Me, I’m Irish.” Aye, you know the one I’m talking about, you scurvy little bastards. It’s that baby-dung green St. Patrick’s Day fashion atrocity that smells like an abused urinal cake left to rot in the crapper of some Eastern Kentucky dive bar. It reeks of stale beer and the piss of twenty men with Chlamydia, yet there is a hint of aftershave in there that suggests its last dance was at least one attempted with some level of civility. The damn thing is all stained up on the gut, too, which by your best assessment, is either the remnants of Shepard’s pie or dried jizz. Without DNA testing, there’s just no way to tell. All we know for sure is the official garb that some of you will wear during the upcoming Irish holiday is just as fucking disgusting and dumb as the green beer you plan to drink. So, we’re here to warn you that, not only should you pitch that crusty rag in the trash right now, but you really don’t want to be drinking brew that looks like it was juiced from the nipples of some hipster vegan with coronavirus.

We realize that some of you wholeheartedly believe that sucking down green suds on St. Patrick’s Day is an Irish tradition, one that our ancestors were rocking long before they jumped off the boat. Well, we hate to break it to you, boyos, but this bullshit is cut from the same history book that asserts Christopher Columbus was some legendary pioneer who discovered America.

Although there is some debate on when green beer first came blasting onto the scene, the creation is mostly credited to Dr. Thomas H. Curtin, who they say started coloring beer in 1914 for fancy pants members of the Schnerer Club of Morrisania in New York. Yet, it wasn’t until the 1950s that the novelty of green beer was popularized in the United States. It’s a tradition, though, that sure as shit didn’t begin anywhere close to Ireland. In fact, step inside any pub throughout the Emerald Isle and ask the barkeep to turn your beer green and see what happens. Some mean bastard, all musty with the odor of corned beef and cabbage, is probably going to step up to give you a savage beating. The Irish aren’t having anything to do with that green beer nonsense. No, sir, no way. When it comes to their preferred pint, they are loyal to their homeland brand of Guinness. And you know what they say? Once you go black, you never go back.

America has a way of bamboozling the average citizen by feeding them ripped off traditions, bastardizations of others, and fairy tale, religious jibber-jabber intended to make the troglodytes of society look like the cool kids. But they’re not. The United States has taken the concept of St. Patty’s Day and ran with that fucker like it stole it – and it did – commercializing a well-known Irish patron saint in a way that makes the gowls getting into the full, whacko spirit of it all look like a bunch of sods and dopes. But if the sheer idiocy of dressing up in green clothing branded with a heaping helping of dipshittery, all drenched in gallons of colored beer isn’t enough to inspire you to cut the shit, perhaps learning that these colored suds can fuck up your innards will.

The dyes used to manufacture green beer are some of the vilest of the bunch, according to health experts. They have been known to cause kidney tumors, cancer, bladder issues and a wealth of other problems that you’d probably be better off without. I mean, who in Hell’s holy name wants to be laid up in the hospital with a bunch of hoses coming out of every orifice of their body just because they knocked back a few too many jade piss waters in the middle of March?

It is also worth mentioning that all of that green beer will put a man with even the strongest bowels on the shitter. The dyes are made with chemicals, and they just don’t jibe with the guts properly. They wreak havoc on the intestines in a way that has been known to cause a wicked case of the green squirts. And no, that ain’t no superhero we’re talking about. Listen, I don’t know about you, fellas, but I like my stool to come out only one way, and that’s as dark as night and as solid as a tip on a race horse. Honestly, more than six beers already reduces the possibility of my morning squeeze emerging in this manner, so I damn sure do not want to tempt fate.

Furthermore, even without all of the evidence showing that this green beer business is just some trash fashion designed by the same breed of American that believes praying for gunned-down citizens is a solution to a violent nation, we must ask ourselves why? Why in the fuck are we getting so excited about it in the first place? We can’t be that bored, can we? St. Patrick’s Day is the only holiday where Americans feel the need to color the alcohol as some twisted nod to heritage. Think about it. No one is out there serving red, white and blue booze during the Fourth of July, and they aren’t making eggnog green and red during the Christmas season. Isn’t it good enough that we can use these holidays as an excuse to get hammered on a weekday without having to make a spectacle of ourselves? Come on, enough is enough. Let’s just stick to the classics.

Oh, I know what you’re thinking: Man, that’s some racist mumbo jumbo, a bunch of hotheaded fake news designed to suck all of the joy out of the American drunkard. You can’t go around discriminating against green, purple or even orange beer just because you don’t agree with it. This is America, after all, freedom of speech and all of that noise. A place where beer of any race, creed and religion can expect to be made by the people, for the people, or something to that effect. Well, I can and will resist green beer this year and every other subsequent year until the day I die. So, please don’t ask me this St. Patrick’s Day if I want green booze to help celebrate the 30 percent of my genetics that was spawned by the bumping of Irish uglies. I will, as all of you should, kindly refuse this offering. And if anyone tries to pinch me over that shit, it’s your ass.