What’s Funnier? This Driver Wrecking A U-Haul And Sprinkler System In A Parking Garage Or The Comments? 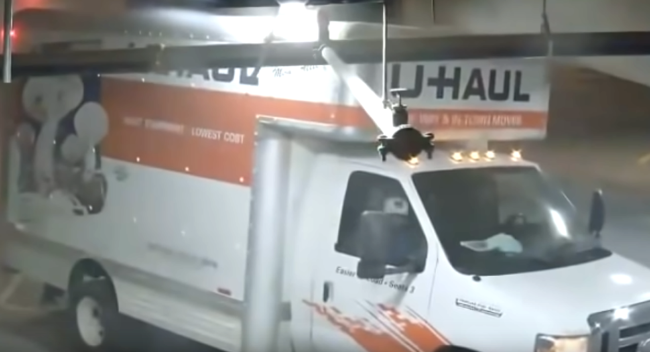 Remember when Epic Fail videos were all the hotness on the internet? We need to bring that back. Because this video of two guys trying to maneuver through a parking garage in a U-Haul moving truck that obviously does not fit inside said parking garage is flat out comedy gold.

I don’t have a lot of information to go along with this video other than the fact that Jalopnik was able to confirm via a U-Haul representative that the surveillance footage was taken on April 9th, as what appears on the video’s time stamp, and that it occurred in Black Hawk, Colo.

Not that the video really needs much more context than that. It could have been taken anywhere in the world at any time of day and it would be irrelevant because the sheer hilarity involved is timeless.

Speaking of the time stamp on the footage, this whole mess appears to have taken place at around midnight local time, which is probably both a good thing and a bad thing.

Good because with it being so late there weren’t a zillion other cars trying to get around this insanity. Bad because, as you will see, surely the fire department was alerted and the carnage they must have seen when they arrived meant a very long night for them and anyone else who had to fix the damage.

That doesn’t mean that there weren’t any other cars in the parking garage though. Because at one point, around the 1:30 mark, another car actually passes this disaster. I’d pay real money to hear what they were thinking when they turned the corner and came upon this mess.

I dare you to watch this clip from the video and not laugh.

Bruh was so shook up he didn’t even turn on the windshield wipers once the sprinklers kicked on and drenched his U-Haul.

“It just keeps getting worse!”

“My anxiety just went thru the roof.”

“Did they just keep going until the building collapsed?”