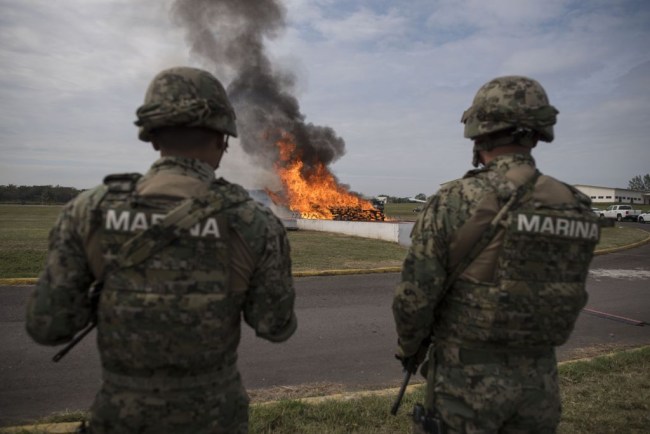 It seems that everything is getting shutdown these days, which also includes a drug cartel’s compound that featured lions and gators on the premises.

Mexican military shutdown the Monte Rico compound in the state of Veracruz, which is registered to brothers Jacinto and Alberto Rodríguez of the Los Piñas drug cartel, one of the country’s fastest-rising cartels. Besides having drugs on the compound, it was also home to various wild animals. There were five deer, an ostrich, a peacock, two pigs, lions, and a lake full of alligators.

The lions and gators were fed an interesting diet of the drug cartel’s rivals. That’s some Scarface-level shit. The Los Piñas Cartel would torture their enemies, and when they were done with them, they would feed them to the lions and gators. Usually you go to zoos so you can feed the animals, but at this compound you are what feeds the animals.

Imagine being a kid and living near this drug cartel headquarters and walking onto the property because you thought it was a zoo? You go to see the animals, and one lion has a human arm in its jaw. A real teachable moment for the kid.

The raid of the cartel compound went down last week after months of planning, according to news reports. The raid on the Monterrico Ranch was sparked after the Belén González Search for Missing Persons Collective asked the Veracruz government to search the lagoon for human remains.

Heriberto Ortiz, 59; his wife, María de Jesús Octavo, 49; and their children, Daniela del Carmen Ortiz, 23, and Carlos Alberto Ortiz, 25; were kidnapped by armed men in the Veracruz municipality of Isla on November 18, 2019. Authorities suspected that the Los Piñas Cartel was involved with the disappearance of the family, and GPS from Heriberto’s phone brought them to the cartel’s ranch.

The bodies of the missing family have yet to be found.

The Los Piñas drug cartel is led by Nemesio ‘El Mencho’ Oseguera, who is wanted by the Drug Enforcement Agency. The DEA is currently offering a $10 million reward for information leading to Oseguera’s capture.

Let’s just hope that Mexico doesn’t suffer an environmental crisis in the same way that Colombia experienced after Pablo Escobar’s hippos got into the wild and started crapping all over the place.