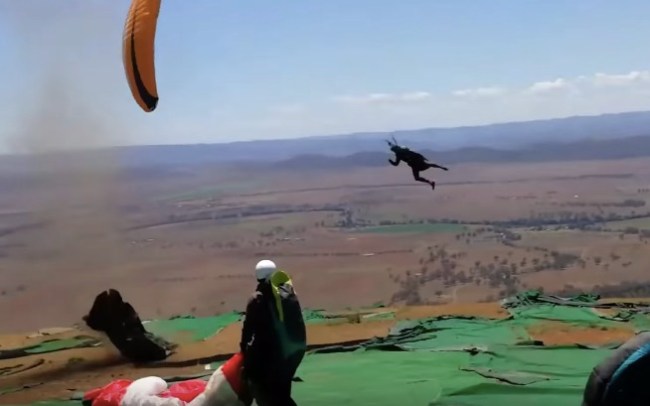 I didn’t learn the named for a ‘dust devil’ until my Junior year of college when I was home for Summer break and drinking some frosty beer sodas on the beach in Siesta Key village. We were all chilling in our beach chairs around a cooler that was mostly full of empties at that point when out of nowhere a dust devil popped up and all hell broke loose.

The swirling mini tornado grabbed the cooler and threw it briefly into the air, causing all of the empty beers to spill out. Then those empty beers were all flying around wildly in the air while my friends and I were running around in circles like chickens with our heads cut off, bouncing off each other, not sure where to run. We didn’t know what was happening. We weren’t sober. And if you were a hundred yards down the beach watching this happen it was probably some of the funniest shit you’d ever seen in our life.

I have to imagine that the paraglider in this clip below didn’t find anything funny about his situation. While getting ready to embark on a paragliding flight in New South Wales, the experienced glider was caught by a dust bunny which grabbed them by the parachute and threw them wildly around in the air.

It all happens pretty quickly for the paraglider who was picked up off the grown and strewn about but at that moment the people on the ground seem to forget that the dust devil is still bearing down on them. The group’s concerned about their friend, not the imminent threat.

According to The Sun, the man who was picked up and tossed around by the dust devil was an overseas visitor who’d come to New South Wales, Australia for some extreme sports rest and relaxation. Both he and his wife are paragliding instructors who were attending some sort of instructors meetup. He was one of forty people on that ledge waiting to take off on a paragliding adventure.

That woman you hear yelling in the video was his wife and the other people in the video were fellow paragliding instructors who were all desperately trying to secure the gear before the dust devil threw everything off the cliff.

After gaining control of the paraglider and flying away from the dust devil he actually flew around on a leisurely 5-hour flight. I had no idea that these paragliding adventures can last anywhere close to that time. I thought these were like 20-minute flights at most. 5 hours?!