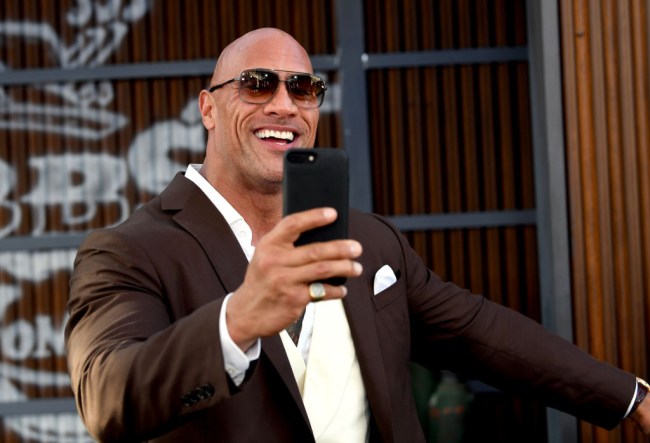 What’s in your gym bag? A bottle of water, deodorant, flip-flops, hand sanitizer, headphones? But what about raw hot dogs and tequila? Those are the necessary workout items that Dwayne “The Rock” Johnson brings to the gym for his workouts.

In an Instagram post, The Rock revealed what’s in his gym bag. The video is captioned: “Motivation Monday and a good morning from the Iron Paradise. Have a productive week, my friends. And when you think you’re ready to eat lion meat, let me know.”

The Rock pulled out a doll of Maui, which he was the voice of in the Disney movie Moana, and a Trolls coloring book that his daughter colored. There was also a post-workout shake, an action figure of himself to give to Kevin Hart to play with, a beanie, yellow headphones, and a bag of lion meat. The “lion meat” Dwayne is talking about curiously looks a lot like raw hot dogs. But during the video, The Rock assured his fans that the lion meat is definitely not raw hot dogs.

“They look like hot dogs, but they’re called ‘lion dogs’ and they’re actually made from the intestines and the blood of lions,” The Rock said. “A little secret, a little workout secret that’s a good post-workout snack.”

To wash down the lion dogs, Johnson brought a small bottle of tequila to the gym. The añejo tequila is The Rock’s own brand of tequila that is expected to be released in the first quarter of 2020.

Tequila at the gym? Genius! (Until you drop the barbell on your neck).

Blood flow finisher. If your gym has an iso-lateral high row, try coming to the outside and change your grip to high and wide. Control your movement for an insane isolated lat stretch and contraction. Though Im on my honeymoon, after I put all my girls to bed – I’m hitting the iron and getting after it. No excuses. Over here getting all kinds of honeymoon pumps in 😉💪🏾 #ironparadise #islandstyle #latenightbloodflow

Whatever country my plane touches down in, I immediately go find my local “Iron Paradise” and get after it. It drives your system to adjust to the local time zones, combats jet lag and helps balance & anchor you so you can start your work day with great productivity and value. Otherwise I’m behind the 8-ball the whole tour and if you’re not the lead dog, the view is always the same. Lead dogs only. Give it try next time you roll out. #presstour #hobbsandshaw #china