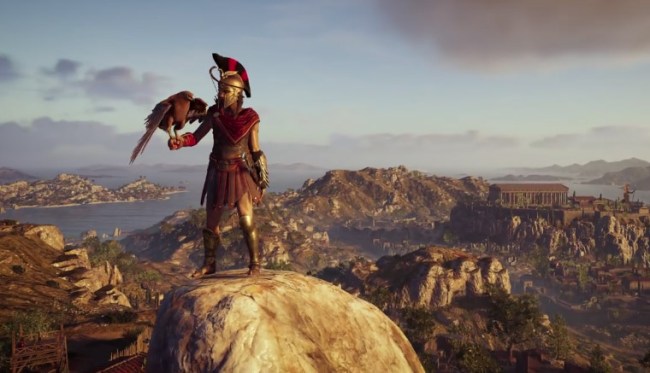 Since it will likely be one of the first games discussed at E3 2018 that will hit retailers and online stores the quickest, let’s start with Ubisoft’s follow-up to Assassin’s Creed: Origins, which comes out on October 5th, Assassin’s Creed: Odyssey.

In the first ever gameplay walkthrough of Assassin’s Creed: Odyssey we get to visit Mykonos City in Ancient Greece where our Spartan hero Kassandra (you can also play as Alexios) prepares for her next adventure.

Features we get to see put into action include new dialogue options, weapons and combat ability customization, and epic clashes between Sparta and Athens. These new features now mean the addition of over 30 hours of choice dialogue as well as multiple possible game endings.

WB Games also released a new gameplay trailer for their upcoming title Hitman 2: Miami. The video showcases the new Miami setting, including an in-progress motorsport race as well as new tools, weapons and disguises. Hitman 2 will be released on November 13, 2018.

You can take control of vehicles and machines recreated from all the leading brands in the industry such as the aforementioned Deere, Case IH, New Holland, Challenger, Fendt, Massey Ferguson, Valtra, Krone, and Deutz-Fahr. Farming Simulator 19 will also feature new American and European environments, in which to develop and expand your farm, as well as new machinery and crops. Farming Simulator 19 will be available Fall 2018.

We also got a new gamplay trailer for Insurgency: Sandstorm at E3. Insurgency: Sandstorm is a game of team-based tactics and objective-oriented gameplay in a fictional, contemporary Middle Eastern conflict, complete with player versus player, competitive matchmaking and co-operative game modes versus AI. Your soldier’s appearance, weapons, attachments, armor, and amount of carried ammo are all up to you. Call in airstrikes, use vehicles with mounted weapons, and equip a wide range of specialist weaponry from grenades to drones to C4 explosives. Insurgency: Sandstormreleases on PC in September 2018, and on PS4 and Xbox One in 2019.

A couple of interesting-looking VR games also got new trailers this week at E3.

First we have Wolfenstein: Cyberpilot. In Wolfenstein: Cyberpilot, you’re the best hacker in town. Your mission is to aid the French resistance in 1980 Paris by taking control of powerful Nazi war machines, burning your way through the City of Love, leaving dead Nazis in your wake. Sounds relaxing. This game will be released on December 31, 2019.

The other VR game of interest revealed this week is the horror title Transference. Transference is being billed as bridging the gap between movies and games and a true collaboration between Hollywood and gaming. In it you come face to face with a fractured family as you freely explore their minds. Navigate a dream-like home filled with secrets you can discover. Collect the evidence of a family’s history to choose how you repair their lives. And learn the rules of a place bent on breaking them to unlock the truth.

All of these video games can be pre-ordered using the links to each title above where available.