Eddie The Otter, Known For Dunking And Self-Pleasuring, Dies At Age 20 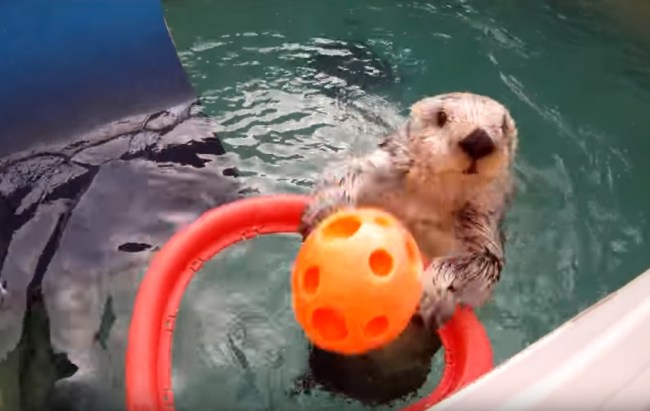 A day after we got word about the aquarium being forced to apologize for calling a sea otter “thicc,” we get more tragic otter news — Eddie the otter has died at the age of 20. Eddie was known around the world for slam-dunking basketballs. But Eddie was also known for scoring on himself.

Eddie the otter was the Air Bud of ocean dogs. Eddie was a superstar at the Oregon Zoo where he entertained the crowds and became a viral sensation for his abilities for slam dunking on a basketball net in his pool. Here is the hype video that turned Eddie into an internet celebrity.

Besides slam dunking, Eddie was also known for pleasuring himself. On Thursday, an Oregon Zoo spokesperson confirmed that Eddie was a big proponent of self-love, “Yes, that was Eddie who displayed so much ‘confidence’ in front of zoo guests.”

Trainers had Eddie play basketball in the pool as a form of therapy for his little arthritic elbows. I wonder how Eddie wore out his elbows? The typical life expectancy for sea otters is 15-years-old and Eddie lived to a ripe 20, so it would seem that balling and self-fellating is the key to a long, healthy life. There’s heroes and there’s legends… Heroes get remembered, but legends never die.

Eddie was just a pup from the California coast when he was rescued in 1998. Eddie was brought to the Oregon Zoo in 2000 and lived a happy life of dunking and self-fellating himself. How jealous are you that you can’t do either? On Thursday morning Eddie the sea otter was euthanized. Add Eddie’s tragic death to all of your other bad memories from around the holidays that will haunt you each year around this time for all of your days.

“At nearly 21, Eddie was considered one of the oldest — and most talented — sea otters on the planet,” a press release from the Oregon Zoo read. Every otter dies, but not every otter lives.

In loving memory of Eddie.
At nearly 21, he was one of the oldest and most-loved sea otters on the planet. pic.twitter.com/mteRMVlmNF