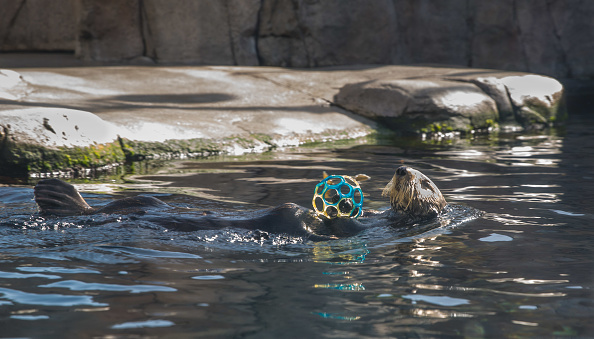 You shouldn’t call people fat, that’s a given. But you can call things like tagliatelle pasta, Yankee candles, Anatolian rugs, scotch tape dispensers, and sea otters fat. That is because these are either inanimate objects or animals that can’t comprehend language and will not know that you called them obese. These things don’t even know what “fat” is. Despite these truths being factual, it didn’t stop people on the internet getting “outraged” when a sea otter was called “thicc.” This is where we are in 2018, we have solved all other problems and the only quandary left to resolve is mean words said to marine mammals.

The social media manager for the Monterey Bay Aquarium in Monterey, California, posted a spicy tweet to get engagement on Twitter. Good news! The tweet went viral! Bad news… it went viral because the outrage mob dragged the aquarium. The tweet used internet jargon to point out that Abby the sea otter (Not the svelt otter seen above) maybe packed on a few lbs from Thanksgiving by calling the sea otter “a thicc girl” and “an absolute unit.”

Abby is a thicc girl
What an absolute unit
She c h o n k
Look at the size of this lady
OH LAWD SHE COMIN
Another Internetism ! pic.twitter.com/s5fav2gu09

The PC police found the tweet to be “problematic” and were frothing at the mouth to get a scalp for the “insensitive” words. How dare anyone call a sea otter thicc! Wait. Thicc is a compliment. Let me remind you, sea otters have no idea what “thicc” means.

The tweet went viral, reaching over 10,000 retweets and more than 36,000 Likes. Monterey Bay Aquarium was inundated with the fauxrage about posting an “insensitive” tweet about the weight of a sea otter. “Seariously tho, Abby is looking fit for one of the toughest jobs in the world: Raising stranded sea otter pups! She’s one of 6 resident females that train orphaned otters in the necessary skills to survive back in the wild,” the aquarium tweeted. “There’s a lot more to this sea otter than meets the eye!” The otter madness of this all.

Seariously tho, Abby is looking fit for one of the toughest jobs in the world: Raising stranded sea otter pups! She's one of 6 resident females that train orphaned otters in the necessary skills to survive back in the wild. There's a lot more to this sea otter than meets the eye!

They even posted a tweet with the cutesy hashtag of #bodypawsitivity to try to win back the animal lovers, but it was too late, the sharks smelled blood. That pun was followed by an adorable video of Abby eating, which on any other day would melt hearts, but on this day it would be deemed as “fat shaming.” Let me remind you, sea otters cannot read insults or any words.

The Monterey Bay Aquarium was forced to issue an apology for calling a sea otter “thicc,” which is peak 2018. Let me remind you, sea otters cannot understand offensive speech by humans, Dr. Doolittle is not real.

Hey everyone. It has come to our attention that some of the references in this tweet are problematic and insensitive. We're posting here in the thread so that people who have engaged with this tweet will join us in our learning moment. 1/4

If our tweet alienated you, please know that we are deeply sorry, and that we offer our sincerest apologies. If you follow our feed, we often reference popular memes to talk about the ocean. In this case, the memes used had connotations we were unaware of until now. 2/4

In particular, several terms referenced originated from African American Vernacular English (AAVE) and specifically reference Black women's bodies. Using them in a sea otter meme without that background makes insinuations we never intended. We need to do better. 3/4

Our mission is to inspire conservation of the ocean, and we're thankful for your support as we try to advance that mission on social media. We're also thankful for those of you out there pointing out our blindspots and how we can improve. Thanks everyone. 4/4

Abby is an 11-year-old sea otter who serves as a surrogate mom to orphaned otter pups at the Monterey Bay Aquarium. The water dog weighs 46 pounds, which is only one pound over the average weight of an adult female otter. The aquarium attempted to do damage control by saying that the obese otter was not obese and it was just a bad angle. If I had a nickel for every time I heard that one.

While most of the responses said that the aquarium did nothing wrong, the Monterey Bay Aquarium bent the knee to a handful of random accounts that were “offended.” Now if Abby the sea otter was listening to “Baby It’s Cold Outside,” that would be a legitimate thing to be outraged at.

You can decide for yourself what you think of Abby, here is the Chonk chart for reference.