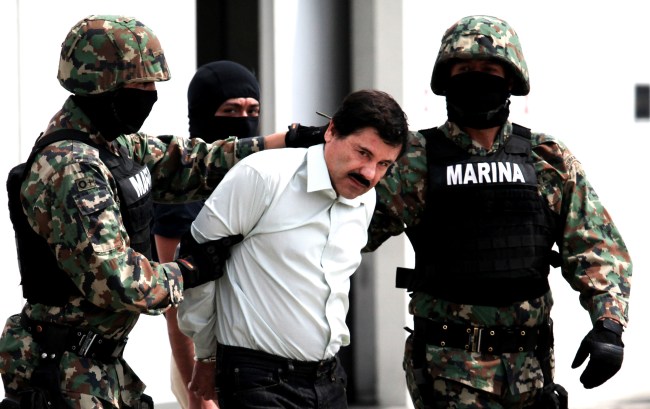 I’ve developed a slightly unhealthy obsession with cartels ever since I binged the first couple seasons of Narcos so I’ve been keeping a very close eye on the trial of Joaquín Guzmán— a.k.a. “El Chapo— the Mexican drug lord whose appetite for brutality rivals that of Pablo Escobar.

After escaping from prison multiple times in Mexico, El Chapo was arrested in 2016 and finally extradited to the United States, where he was charged with basically every single crime under the sun before pleading not guilty to all charges.

His trial began back in November and there have been a number of wild revelations that have come out of it, like the time he allegedly had a man and his wife killed because the guy didn’t shake his hand.

Multiple people have taken the stand to testify against El Chapo— including one of his own sons, who spent five hours detailing how his father managed to become one of the most powerful men in the world.

Last week, Guzmán’s wife was in attendance when prosecutors introduced some juicy text messages he sent to one of his mistresses, and yesterday, another one of them appeared in court and told one of the craziest stories to come out of the trial so far.

According to Vice reporter Keegan Hamilton, Lucero Guadalupe Sánchez López testified against her former lover and recalled her experience with him during their fling— including the time he ran naked through a secret tunnel to avoid arrest in 2014.

You might want to strap in because you’re in for one hell of a ride.

The TV screens were actually surveillance cameras that showed what was happening on the street outside Chapo's house. Early the next morning, at around 4am, she awoke to a loud thump and yelling. The cameras showed Mexican marines using a battering ram on the front door.

The bathtub opened with a hydraulic piston w/ wooden steps underneath. Lucero: "The only other thing I could see was complete darkness."

Condor closed the tub. Lucero felt trapped. "For me it was horrible. I'd never been in a place like that. It was humid and filed with mud."

Lucero could still hear the marines banging on the door with a battering ram. Chapo and Condor struggled with a second door inside the tunnel made of reinforced steel.

It opened, then they took off running. Chapo was in the front — again, totally naked. The others were clothed.

There’s a lot to digest here but my favorite takeaway might be the fact the drug lord thought far ahead enough to put a bathtub on hydraulics to conceal an escape tunnel.

Sure, he might be a terrible person, but you kind of have to respect the ingenuity.