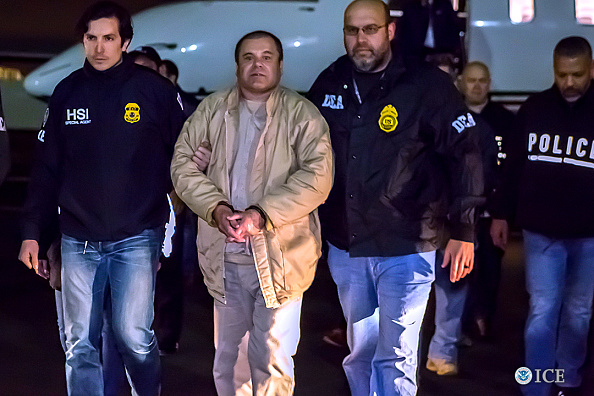 When Vicente Zambada Niebla entered the Federal District Court in Brooklyn on Thursday, someone should have yelled, “DEAD MAN WALKING!” That is because Niebla presented five hours of damning and eye-opening evidence against his drug lord father, the Sinaloa Cartel, and Joquín “El Chapo” Guzmán.

Vicente Zambada Niebla or “El Vicentillo” is the son of alleged cartel leader Ismael Zambada Garcia, who is El Chapo’s highest-ranking Sinaloa Cartel partner Ismael (El Mayo) Zambada García, testified for a second day Friday and provided a remarkable inside look at the inner-workings of the biggest drug cartel in the world. Niebla wanted the world to know that his father, known as “El Mayo,” is the head of the Sinaloa Cartel. Assistant U.S. Attorney Amanda Liskamm asked Niebla, “What does your dad do for a living?” Zambada replied, “My dad is the Sinaloa Cartel’s leader.” Garcia is a former farmer turned drug lord and the 71-year-old is on the U.S. Drug Enforcement Administration’s most-wanted list. El Mayo is facing a long list of charges from the U.S. government similar to the crimes alleged against El Chapo.

Vicente Zambada Niebla was known as the Sinaloa Cartel Prince and the 43-year-old was being groomed to take over for his father and become the next powerful Mexican drug kingpin. However, at some point, Niebla allegedly told his father and Guzmán that he wanted to retire from the drug game. That was allegedly before Niebla was arrested in 2009 in Mexico City. Niebla was convicted on drug charges for his role in trafficking thousands of pounds of Colombian cocaine through Mexico and into the United States by using submarines, speedboats, private jets, and on even in shipments of frozen meat in a truck.

On Thursday and Friday, Niebla provided critical inside information about the operations of the Sinaloa Cartel drug empire. During Niebla’s five hours of testimony, he provided detailed information on the cartel’s smuggling routes, money-laundering schemes, extensive bribery networks, and drug wars against rivals.

‘El Vicentillo,’ El Chapo’s ex-logistics guru, was a cartel big shot since teens: Vicente Zambada Niebla, who agreed to testify against “El Chapo” and Sinaloa cartel, was a big player in the cartel since his teens, court filing says https://t.co/ko4ZIrxICR US Law Police Crime pic.twitter.com/dvY72JrwZa

Zambada Niebla revealed where the Sinaloa Cartel acquired their stash of weapons that included AK-47s, AR-15s and semi-automatic pistols known as “mata policias,” or “police killers.” He said, “99% of (the guns) were obtained in the United States at the borders.” The weapons were necessary to the cartel because they were engaged in a bloody war with Guzman’s cousins and former partners Hector and Arturo Beltrán Leyva. Zambada-Niebla testified the cartel was buying more than 100 weapons a month and “millions in ammunition” to arm the group’s sicarios.

Niebla said he had never personally killed anyone but ordered murders “several times.” When asked for an exact figure, he said he wasn’t sure how many people he ordered to be murdered. Niebla did recall an instance where he ordered his men to kidnap and torture a rival cartel member. Kidnappers tortured the man nicknamed Caimán who worked for the Beltrán-Leyva family. Once the man gave up the information they wanted they then killed him. “I want to say it in a nice way, but they tortured him,” Zambada told the court. “After having him there for a few days and extracting that information from him, he was murdered.”

Zambada-Niebla claims that he himself visited Mexico’s presidential palace to personally tell a high-ranking officer that he didn’t appreciate government raids on his mother’s businesses. In 1997, a young Niebla allegedly met with General Roberto Miranda Moreno, a high-ranking member of Mexico’s version of the Secret Service.

Niebla added that his father would regularly pay bribes to a military officer who worked security for former Mexican President Vicente Fox. The officer provided a heads up as to when raids would happen and any other pertinent information that could help the cartel. Zambada said that his dad’s bribery budget was as high as $1 million per month at certain times. He claims that one army general in the Mexican defense department received a monthly salary of $50,000 from the cartel.

Zamada, who said to be Chapo’s former protégé, claimed that in 2007 he had meetings with “high-level politicians” and representatives of Mexico’s national oil company Pemex. They discussed a plot to smuggle 100 tons of cocaine using one of the firm’s oil tankers.

Niebla made two plea deals with U.S. prosecutors where he would be a cooperating witness to testify everything he knew about the Sinaloa Cartel, his father, and El Chapo. The Sinaloa Cartel Prince also forfeited his personal fortune which is said to be worth more than $1.3 billion. However, El Chapo’s defense lawyers argue that Niebla will be motivated to lie to get himself out of jail or to help his father.

Zambada Niebla claimed Chapo told him he had contacts at the U.S. Drug Enforcement Administration who “could only help me. They could not help my compadre Chapo or my dad.” Allegedly, Mayo and Chapo proposed that the Sinaloa Cartel should cooperate with the DEA by providing information on rival drug gangs, thus killing two birds with one stone.

The 61-year-old Joquín Guzmán has been on trial since November where he has pleaded not guilty to a 17-count indictment that includes drug trafficking, money laundering, conspiracy, and weapons charges. The alleged crimes spanning a 25-year period and the infamous drug lord has been charged in six federal jurisdictions, including New York, Chicago, and Miami. He has been If convicted El Chapo faces up to life in prison, but he will not face the death penalty as part of the agreement U.S. prosecutors made with the Mexican government for the 2017 extradition of Guzman.

Also during the trial of El Chapo, previously unreleased photos were presented in court showing Guzmán dancing with a woman with his infamous gun strapped to his side. In the photos, El Chapo is seen with his diamond-crusted firearm that has the drug lord’s initials on it.

A close-up of the pistol. The letters JGL are Chapo's initials, Joaquín Guzmán Loera. pic.twitter.com/YjfY0GPcBC