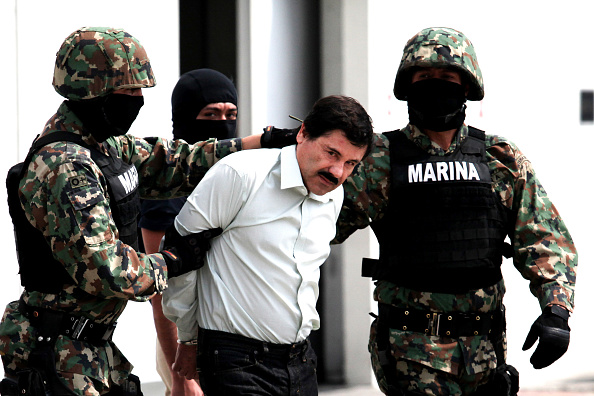 The U.S. government’s war on drugs made smuggling drugs somewhat difficult for drug cartels. Desperation breeds ingenuity. Drug kingpin Joaquin “El Chapo” Guzman and his Sinaloa Cartel devised a genius way to bootleg massive amounts of cocaine into the United States — via a train that ran from Mexico to New Jersey.

During El Chapo’s federal trial in Brooklyn, New York, former Sinaloa Cartel member turned informant Tirso Martinez Sanchez explained how El Chapo made hundreds of millions of dollars by smuggling cocaine on trains. According to Sanchez, the drug organization took control of cooking oil tankers that were on trains. The cartel would siphon out cooking oil from the tankers then implant secret compartments that would hold several kilos of cocaine. Suddenly, your Red Dead Redemption 2 train heists don’t seem to be as profitable as they could be.

The packages of cocaine would be coated with a grease so the narcotics wouldn’t be detected by drug-sniffing dogs. The drug smugglers would then refill the tanker with an inch or two of cooking oil to dissuade customs agents from crawling around in the tanker. I suddenly feel the need to order some cooking oil.

The cocaine-loaded locomotive would travel from Mexico to a warehouse in New Jersey where the product would be offloaded onto box trucks and then transported to New York City. Sanchez said he and his men would transfer the drugs to cars that they would meet distributors at fast food joints. Then give the drug dealers the keys to the cars packed with coke. “We would tell them what car held the drugs, and hand them over the keys,” Sanchez told jurors at the trial.

Sanchez revealed that the train routes expanded to include Chicago and Los Angeles between 2000 and 2003. Sanchez estimates that the Sinaloa Cartel made between $500 million and $800 billion from the cocaine train. So if you indulged in some nose candy in the early 2000s and thought it was weirdly oily, you now know why. You also know where it may have come from as well as all of the pomp and circumstance that people went to just so you could enjoy some blow.

The 51-year-old took over the NYC train operation in 2000 after one predecessor shot himself in the face and another died during plastic surgery. However, he retired because of “too much pressure” after authorities raided three of the drug warehouses he was overseeing. Sanchez said the raids cost the cartel $100 million and El Chapo’s men were not pleased with his management. “They wanted to kill me because I had lost the train route, that means of transport,” Sanchez testified. “I just didn’t want to keep going.” Can’t blame the dude.

El Chapo is facing 17 charges of trafficking $19 billion of cocaine into the United States over decades. The 61-year-old drug overlord has pleaded not guilty to all of the charges. This is the fifth week of the 61-year-old drug lord, which has included federal prosecutors asking Judge Brian Cogan to make “questions or evidence” about the “Fast and Furious” gunrunning operation “completely off limits” to the defense. “Fast and Furious” was a gunwalking sting where U.S. Bureau of Alcohol, Tobacco, Firearms and Explosives (ATF) allowed thousands of guns to be smuggled across the border between 2006 and 2011. Unfortunately, the ATF lost track of about 2,000 firearms and some of them ended up in the hands of El Chapo’s Sinaloa Cartel. Guns linked to Operation Fast and Furious were used in the fatal shootings of a Border Patrol agent in 2010 and an ICE agent in 2011.

On Monday night, Guzman’s wife Emma Coronel Aispuro gave a rare interview to Telemundo where she said she never saw him do anything illegal. “[The media] made him too famous,” the 29-year-old Aispuro said. “It’s not fair. They don’t want to bring him down from the pedestal to make him more like he is, a normal, ordinary person.”

Emma, who is a former beauty queen, married El Chapo in 2007 on her 18th birthday continued, “That’s what he really wants,” she said. “For everyone to realize how things really are and see it all from another perspective. More than anything, I think that’s what he wants. Just tell it like it is.”

RELATED: El Chapo Allegedly Had Rival Cartel Leader’s Brother And His Wife Killed Over A Handshake