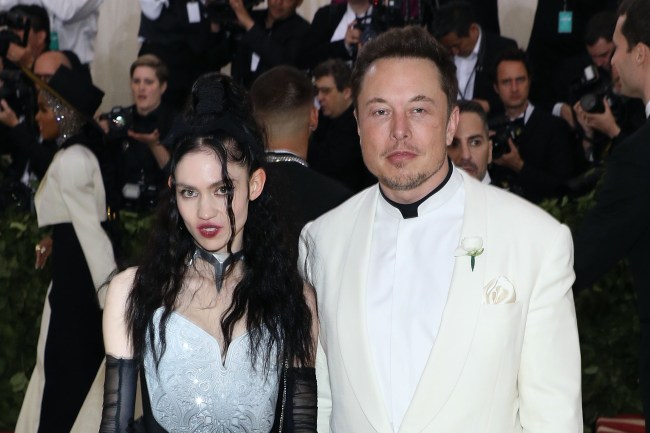 Tesla billionaire Elon Musk and his girlfriend Grimes are one of those couples on Twitter that seem to captivate people’s attention like the Kardashians. You hate to watch it all unfold but you can’t turn away. It’s similar to how I felt watching my first-ever episode of The Bachelor this week.

Don’t get me wrong, there are plenty of diehard fans of Elon Musk and Grimes in the world but their very public Twitter relationship is like some bizarre Reality TV episode unfolding in real-time for the world to see and that captures the attention of an asston of people who otherwise wouldn’t give a shit. Now, for once, they have some REAL GOOD NEWS to share.

Grimes shared a censored pic on Instagram and tweeted both the censored pic and a straight-up topless pic. One where she freed the nip and another where she photoshopped the nips out but there’s a baby photoshopped right onto her belly which isn’t weird at all. Thus announcing there was a baby growing inside of her. I wish I had jokes to make about this but I have a 9.5-month-old son and I witnessed the miracle of life last year so I’m genuinely happy for this couple that I normally wouldn’t give two shits about otherwise. Though, that’s not entirely true because I’m strongly considering a Tesla for my next car.

I don’t know when, how, or why people began talking about Elon Musk and Grimes expecting a baby but I do know that people are losing their damn minds now.

um is Grimes pregnant or what

is this elon musk and grimes child pic.twitter.com/7v58eudKIP

grimes and elon musk baby is gonna come out looking like this pic.twitter.com/NYK4Ar1j9I

“I don’t need $ from a man 🧐 Grimes is self funded” pic.twitter.com/ORiTewgxQN

We could keep going through this Grimes x Elon Musk news all day and enjoying the responses but I think you guys get the point, right? I fully expect them to live-stream this pregnancy straight into every Tesla’s dashboard for anyone who wants to see it as this will be one of the most public pregnancies of 2020.