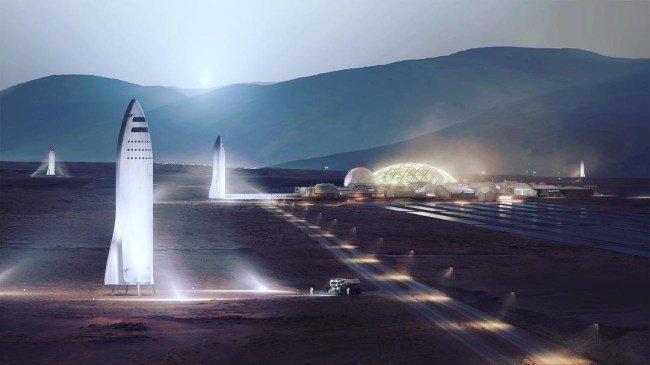 Let’s face it, at some point we’re going to fuck up the Earth and we’re not going to be able live on this wonderful planet any longer. It’s time to save ourselves from ourselves by finding a new place to escape to, which of course we’ll eventually fuck up that new place because that’s kinda our modus operandi. Elon Musk believes we can colonize the Moon and Mars and he unveiled his very ambitious plans during a presentation at the International Aeronautical Congress in Adelaide, Australia.

The SpaceX CEO shared renderings of “Mars City” and “Moon Base Alpha.” The moon base is thought to be a stepping-stone for further space exploration including Mars and features a few dune-like structures to house humans and one vertical rocket ship. The European Space Agency, as well as space agencies from several nations including the United States, Russia, and China, have expressed interest in lunar missions and the desire to create a “deep space gateway” orbital station on the Moon. “This will enable the creation of a lunar base. It’s 2017. We should have a lunar base by now. What the hell’s going on?” said Musk.

The colony on Mars would feature numerous interplanetary rockets, a dome-shaped facility, roads, and wheeled vehicles as seen in the concept illustration.

Also during the presentation, Musk announced revisions to SpaceX’s upcoming 42-engine, 400-foot-tall rocket that is nicknamed the BFR (Big Fucking Rocket). Musk plans to finance by using the BFR to deliver satellites into orbit, clean space debris, and to service the International Space Station. SpaceX believes they can cut major costs by creating one craft that replaces Falcon 9, Falcon Heavy, and Dragon. The BFR will have a delta wing, a payload of 150 tons, 40 cabins, and solar storm shelter. Musk anticipates beginning construction on the BFR within the next year and hopes to have two gigantic rockets available to launch by 2022. The next phase of the mission would be to find the best sources of water, mining, and constructing a propellant plant on the Red Planet. SpaceX hopes to launch a mission to Mars by 2024 with four rockets: two containing cargo and two transporting crew. Colonize the Moon and Mars in only seven years? These are truly ambitious plans especially considering that Mars is not especially human-friendly with a thin-atmosphere, noxious gases, a cancer threat from space radiation, 63% less gravity, constant dust storms, arid and rocky terrain, as well as a lack of water, food, and oxygen.