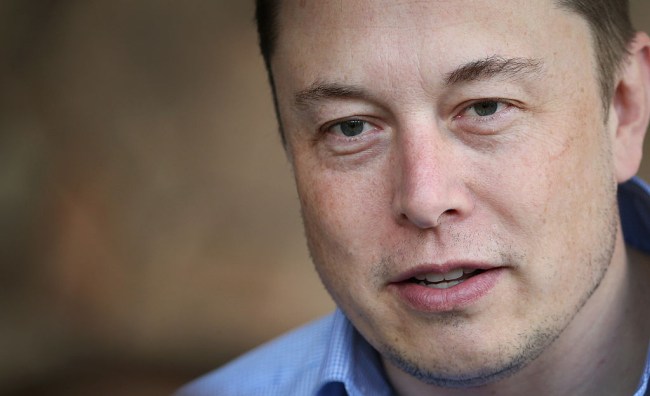 File this in “things I can’t believe just happened, yet are totally AWESOME…”Elon Musk smoked a blunt on a livestream with Joe Rogan last night. Never thought in a million years we’d witness an Internet event where someone of Elon Musk’s stature and reputation – entrepreneur, CEO, etc – hits a blunt for all the world to see, but yea – That just happened.

I’ll be straight: It’s a cool moment. Here’s how it went down: Elon Musk awkwardly grabbed a blunt from Joe Rogan after he offered it to him during a sincere intellectual conversation about science, humanity, space, the future, etc. It’s exactly the kind of moment you’d expect to see between two buddies immersed in a deep conversation about life, the universe, and everything. I mean… Who among us hasn’t stayed up with a close friend slugging whiskey and sparking up a little marijuana?

Let him who is without sparkin’ up a jay cast the first stone(d).

Musk later went on to say that he didn’t feel anything for him. Also, it’s worth noting that this happened in California, where recreational consumption of cannabis is perfectly legal.

That said, considering Musk’s status as CEO of a major auto manufacturer and thought leader, it’s potentially a watershed moment in the continued destigmatization of marijuana. It’s also a potentially risky one, but Musk has never really been one to back down from Tesla shareholders. Dude is just gonna be himself.

Here’s a video of Tesla and SpaceX CEO Elon Musk hitting a blunt with Joe Rogan.

Watch out, SpongeBob. Elon Musk smoking a blunt on the Joe Rogan experience about to be meme’d into oblivion.

Ladies and gentlemen, I present to you Elon Musk hitting a blunt with Joe Rogan… pic.twitter.com/uEPRZO3Wa8

You’ve only got one life, blaze on.

But seriously, Internet… Don’t dwell on this. The entire conversation between Joe Rogan and Elon Musk is thoughtful and wonderful and the world at large would be better for paying some attention to it. Here it is..

Elon Musk smoking a blunt is a “mood” pic.twitter.com/M8rHutPxNC

Forever will be callin a Wood a ‘Tesla’ from now on 💨 https://t.co/OVTGep2Ach

Elon Musk is the only person in the world that could make smoking a blunt look stressful. https://t.co/c5QuiZuk81

find someone who appreciates you as much as Elon Musk appreciates Joe Rogan’s samurai sword pic.twitter.com/yABMqomXMh