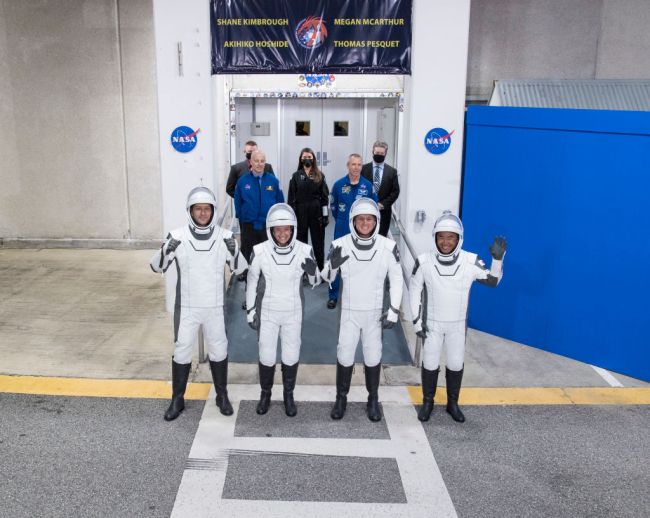 A SpaceX Crew Dragon rocket took off from NASA’s Kennedy Space Center in Florida early on Friday morning and four astronauts from three countries began their six-month stay at the International Space Station with a successful launch from earth. The flight marked the third-ever crewed flight for Elon Musk’s company and is the next step toward commercial space travel.

The skies over @NASAKennedy lit up like a sunrise this morning as NASA's @SpaceX Crew-2 astronauts launched to space!

Here is who is on board:

They spent their last afternoon on earth at the beach in Florida and enjoyed their last non-space food meal before getting some sleep and suiting up just after midnight on Friday.

The calm before the storm L-1 #Crew2 @NASAKennedy pic.twitter.com/bp6z2zTBNl

6 months of space food after this! Thank you to the @NASA_Johnson and @NASAKennedy food lab and food services staff that have been keeping us healthy and well-fed during quarantine. The next time I post about food it will be floating! pic.twitter.com/GOvU2u8Xwy

We're at L-1! On launch day, we'll be driving out to the pad about now. If you want to rock out with me, here's what I'll be playing:@foofighters Learn to Fly@ChiliPeppers Give it Away@OzzyOsbourne Crazy Train@Metallica Enter Sandman@GreenDay Waiting
What would you play?

The crew is ready for liftoff pic.twitter.com/orKr0VcFFT

The astronauts spent hours being strapped into the SpaceX shuttle capsule before the Falcon 9 rocket fired its boosters and propelled the Crew Dragon space craft into space at more than 17,000 miles per hour.

Liftoff of Falcon 9 and Dragon! pic.twitter.com/g6Oi8qwU2Y

The crew is expected to dock with the space station at 5:10 a.m. ET on Saturday, marking the first time in over 20 years that NASA, European Space Agency and Japan Aerospace Exploration Agency astronauts are flying to an staying for a long duration mission on the ISS. They checked in and shared what life is like on board after they reached space and it’s pretty remarkable.

👀 Take a look inside @SpaceX’s Crew Dragon Endeavour currently on its way to the @Space_Station. pic.twitter.com/ajdTjhDnqs

While the launch may not seem like as big of a deal, considering that it was SpaceX’s third this year, it is actually the biggest yet. The Crew-2 mission was the first time that the company reused both a rocket and a capsule. To break it down in its most simple form, the “space shuttle” that you think of is actually split into three key parts— a capsule and two stages of a rocket.

The initial stage of the rocket is what blasts the shuttle into space and it burns through the ascent until its propellants are exhausted. The first stage engine is then dropped from the vessel.

Stage separation and ignition of the second stage as the @SpaceX Crew Dragon makes its way to orbit: pic.twitter.com/mVG6uNCGQk

Once the first stage separates, the second stage ignites and continues the ascent into space. When it has run out of fuel, it too separates.

Dragon has separated from Falcon 9’s second stage and is on its way to the @space_station! Autonomous docking tomorrow at ~5:10 a.m. EDT pic.twitter.com/rg1QjZEl9u

As the astronauts head to their destination in the capsule, the Falcon 9 rocket’s first stage returned to earth and landed on a drone ship in the Atlantic Ocean. That has been done before, but what makes this mission so special is the capsule. This Crew-2 launched marked the first time that SpaceX had reused a capsule, in addition to the rockets. The same capsule that took Crew-1 to space is being used to take Crew-2, and McArthur sat in the same seat as her husband in May 2020.

Though the company has re-flown boosters and spacecraft many times before on satellite and cargo launches, this is the first time that SpaceX reused hardware for a crewed mission. With reusability as a long-made cornerstone of Musk and SpaceX’s business plan, the hope is that recovering and refurbishing hardware can significantly drive down the cost of spaceflight. Thus, this breakthrough can be considered the first step toward legitimate, (relatively) cost-effective space travel for the average person.

It also made for some incredible photographs from across the country, but mostly Florida.

That was the coolest launch I've seen!!!!! The white streak is the booster returning and being illuminated by the rising sun. Just stunning visually watching in person! #SpaceX #NASA #Crew2 pic.twitter.com/9EnQCAOBGR

A stunning launch this morning by #SpaceX, Dragon 'Endeavour' now en route to @Space_Station for #NASA with 4 astronauts onboard. #Crew2 #LaunchAmerica pic.twitter.com/qMcPSOoLv8

The @SpaceX Falcon 9 rocket is seen in the distance behind the @uscapitol in Washington as it was launched from @NASAKennedy to @Space_Station. More launch photos coming, keep checking back! 📷 https://t.co/56Am0ERBaK pic.twitter.com/C7ZbImr7an

Godspeed, Crew-2! Thanks for the incredible show from here in Charleston, SC! #Crew2 #SpaceX pic.twitter.com/gn4TOj6Sk0

Kimbrough, McArthur, Pesquet, and Hoshide will join seven astronauts already on board the station, four of whom arrived on a SpaceX Crew Dragon capsule in November. The 11-person total will be one of the largest crews that the ISS has ever hosted, but it will drop back to seven when the four other SpaceX-launched astronauts head back to earth on April 28.

Friday’s four-person crew also brings the number of people that Musk has launched into space to 10. Pretty impressive.