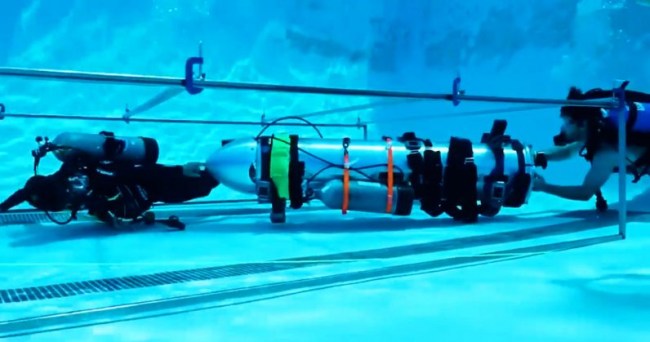 The world has been watching with bated breath as rescue operations are underway to save a youth soccer team that is trapped in a flooded cave in Thailand. In the past day, many of the 12 boys have been saved, but that hasn’t stopped Elon Musk’s team of engineers from SpaceX and Boring Co. from developing a mini-submarine that could save the trapped kids.

The engineers transformed a liquid oxygen transfer tube from a SpaceX Falcon rocket into a submarine. The transport is small enough to fit in the tight cave gaps and light enough to be carried by two divers. The kid-size submarine is big enough for one person to fit inside with their arms crossed. Musk shared photos and video of the sub being tested out in Los Angeles. The video shows the escape pod in a pool and a person popping out of the vessel completely dry.

“Continue to be amazed by the bravery, resilience & tenacity of kids & diving team in Thailand. Human character at its best,” Musk said. The Tesla CEO added, “With some mods, this could also work as an escape pod in space.”

The team of 12 boys and their coach have been ensnared in the Tham Luang Nang Non cave since June 23. The team was exploring the cave, but then torrential rainfall flooded the cave and prevented them from exiting. Musk’s submarine might not be necessary any longer. At last count, a total of eight boys were rescued from the flooded cave complex. However, more heavy rain is in the forecast, which may delay rescue attempts. The trip is extremely dangerous and one Thai Navy SEAL already died while supplying the team with aid. Look at how treacherous this 2.5-mile trek is.

WATCH: @benstracy explains how the dangerous rescue mission in Thailand is being carried out https://t.co/EtiCiCcDcQ pic.twitter.com/Xmw3kNEasu