The Vatican announced Monday that the Catholic Church won’t bless same-sex unions since God “cannot bless sin,” despite being encouraged to “to welcome with respect and sensitivity persons with homosexual inclinations.”

If that convoluted fart was difficult to translate, it basically means Stephen Glansberg can’t sit at your lunch table, but you’ll allow him to eat in the cafeteria. It means that you can pour millions into financing Rocketman, but then publicize a two-page Pope-approved explanation that was categorized as “negative” in all the seven languages it was written in.

How can the Vatican refuse to bless gay marriages because they “are sin”, yet happily make a profit from investing millions in “Rocketman” – a film which celebrates my finding happiness from my marriage to David?? #hypocrisy@VaticanNews @Pontifex pic.twitter.com/sURtrWB6Nd

You can’t make this shit up.

Well I guess you can. 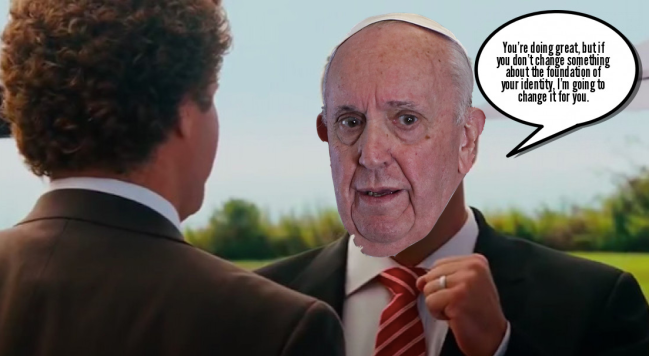 Pope Frank then hops on his Learjet 75 Liberty and sobs into a robe while listening to Candle In The Wind like the rest of us.

And Step Brothers: In Christ is officially made. Anyone know if Apatow’s DMs are open?