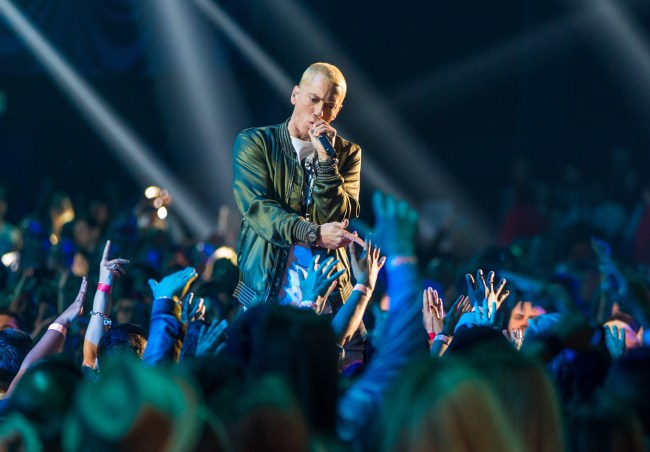 I bet when you went to sleep last night you didn’t think ‘when I wake up tomorrow morning there’s probably going to be a new album from Eminem waiting for me!’

Unless, of course, you’re living on the West Coast. In that case, you might’ve heard the news last night that Marshall Bruce Mathers III dropped a new album without any promo whatsoever.

The 13-track album dropped at midnight without any warning or promo which is almost unheard of in this day and age. Even more so when you factor in the clout of Eminem and how many moving parts were involved in the creation of this album. It’s a miracle that nothing leaked ahead of time.

The album’s titled Kamikaze and it’s available for streaming on Apple Music and Spotify, as well as available for purchase in Eminem’s store, Amazon, Google Play, and iTunes.

Dr. Dre was the executive producer on this new album which features contributions from Kendrick Lamar, Justin Vernon of Bon Iver, and others.

Tried not 2 overthink this 1… enjoy. 🖕#KAMIKAZE Out Now – https://t.co/ANw73KbwMt pic.twitter.com/qfQoTYBTUy

It’s only just come to my attention how many Apple Music users there are out there in the world compared to Spotify Premium. I’ve been rocking Spotify Premium since it came out and had no idea that Apple Music has nearly 40 million users which already puts it at 50% of the size of Spotify.

Anyway, I figured I’d throw you the Spotify embed here since that’s what I use and the medium I prefer.

Like I said above, this album legit came out of nowhere. The Apple iTunes preview provides some insight into how this album came to be:

“Everybody’s been telling me what they think about me for the last few months,” Eminem says on his tenth album’s title track. “Maybe it’s time I tell them what I think about them.” Just eight months after the vulnerable Revival, Eminem has heard the doubts about his relevance and issues a brutal rebuttal; those doubters might feel nervous upon listening to “The Ringer,” which is Em going through receipts over an ominous beat. (Prediction: “I can see why people like Lil Yachty, but not me, though” will break Rap Twitter.) Kamikaze feels like 2002 again—Eminem blowing off steam and blowing up the high road, rapping angry, yet in total control. On “Not Alike,” he teams up with his old right-hand man Royce da 5’9″ to clown Auto-Tuned rappers over a trap beat reminiscent of BlocBoy JB’s Drake-featuring hit “Look Alive.” “Greatest” is a prime Shady flex, brushing off disses like crumbs (Die Antwoord gets roasted). As usual, relationships aren’t spared his rage; “Nice Guy” is a salty he said/she said featuring rising R&B star Jessie Reyez. During his freestyle cypher at the 2017 BET Hip Hop Awards, Eminem drew a line in the sand to weed out Trump supporters from his fan base. Kamikaze extends the challenge to his non-believers: Which side are you on?

If Twitter’s to be believed then Kamikaze is straight up 2003 Eminem.

I haven’t had a chance to listen all the way through yet so I can neither confirm nor deny this news but I’ve got a 1,500-mile road trip in front of me this weekend where I plan on listening and re-listening until I’m tired of it.