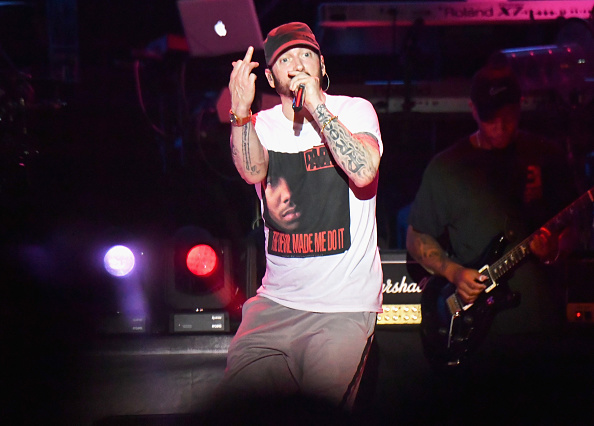 The Eminem-Machine Gun Kelly rap beef has been the main topic of conversation within the hip-hop community for the past few weeks.

It all started when Eminem fired off shots at MGK on “Kamikaze” where he referenced that time MGK sent out a disrepectful tweet about his daughter Hallie.

But next time you don’t gotta use Tech N9ne
If you wanna come at me with a sub-machine gun
And I’m talkin’ to you, but you already know who the fuck you are, Kelly
I don’t use sublims and sure as fuck don’t sneak-diss
But keep commentin’ on my daughter Hailie

Machine Gun Kelly quickly responded to Em’s diss with the track “Rap Devil” where he claims that the veteran Detroit rapper had him banned from Shade 45 radio.

Ayy, somebody grab him some clippers (zzzzt)
His fuckin’ beard is weird
Tough talk from a rapper payin’ millions for security a year
“I think my dad’s gone crazy,” yeah, Hailie, you right
Dad’s always mad cooped up in the studio, yellin’ at the mic

Let’s talk about the fact you actually blackballed a rapper that’s twice as young as you
Let’s call Sway, ask why I can’t go on Shade 45 because of you
Let’s ask Interscope how you had Paul Rosenberg trying to shelf me
Still can’t cover up the fact your last four albums is as bad as your selfie

In an interview on Wednesday Eminem talked about why he initially dissed MGK.

The reason that I dissed him is because he got on—first he said, ‘I’m the greatest rapper alive since my favorite rapper banned me from Shade 45,’ or whatever he said, right? Like I’m trying to hinder his career. I don’t give a fuck about your career. You think I actually fuckin’ think about you? You know how many fuckin’ rappers that are better than you? You’re not even in the fuckin’ conversation.

Today Eminem fired back at Kelly with another diss track called “Killshot” and it’s absolute fire.

Here’s that autograph for your daughter, I wrote it on a Starter cap
Stan, Stan, son, listen, man, dad isn’t mad
But how you gonna name yourself after a damn gun and have a man bun?

With your corny lines (Slim you’re old)
Ow, Kelly, ooh, but I’m 45 and I’m still outselling you
By 29 I had three albums that had blew

The Internet had some pretty great reactions to the record.

#killshot
What Eminem did to MGK pic.twitter.com/vbwg0u5gSD

Jesus and the Gods of the Seven Kingdom and the Knights of the Molten Core.

Rip MGK im not sorry for your dead body. You wanted and received.

Killshot is the best headshot I've ever seen pic.twitter.com/RiJierQPxB

You know Machine Gun Kelly done fucked up when he said Em's beard is weird. That's when I knew Eminem gonna bury him. We know Em had a beard envy for a long time, he finally grew it and Mgk called it weird??!! Now Rot in pieces Mgk. #KILLSHOT reminds you what a diss is🐐🔥#RIPMGK

YESSSSSSSS 🔥🔥🔥🔥#ripmgk
this is sooooo good I'm hitting the replay button and having so much eargasm rn 😂😂😂
goodbye mgk. https://t.co/VLawvr63yW

Just spotted an ambulance headed to MGK house smh we bout to lose another one #RIPMGK #KILLSHOT why you had to do it to him Eminem 😔 pic.twitter.com/xGkQ5lPllS

SHIIIIIIIITTTT can’t believe Em stabbed at Diddy about Pac thought that made me wince a little, that’s gonna cause some big talks. That diss scratched the itch! I didn’t want it to end 🔥 #RIPmgk https://t.co/h9aWKcCIXu

MGK enjoying his Friday and then #KILLSHOT dropped and he snapped back to reality. pic.twitter.com/PWZ026VmWU