Eminem Talks About His Near-Fatal Overdose: ‘Took A Long Time For My Brain To Start Working Again’ 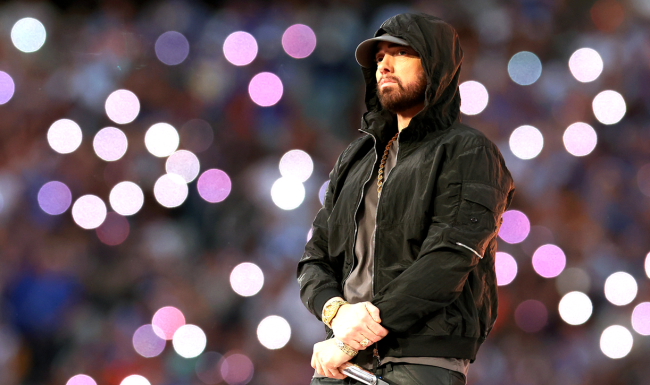 With album titles like Relapse and Recovery, Eminem has not been shy when it comes to talking about his experiences dealing with a very serious drug addiction.

After becoming addicted to prescription drugs, including Vicodin, Ambien and Valium, in the early 2000s, Eminem experienced a methadone overdose in 2007 that almost killed him.

The doctor that treated him said he had ingested the equivalent of four bags of heroin.

Eminem, who admitted taking 30 Vicodin and 60 Valium pills a day, said in the 2013 documentary How To Make Money Selling Drugs, “They said I was about two hours from dying. My organs were shutting down. My liver, kidneys, everything. They didn’t think I was going to make it. My bottom was going to be death.”

Despite all of that, within a month he was back using drugs at the same rate as he was before the overdose.

It wasn’t until April 20, 2008, with a lot of help from fellow musician and former drug addict Elton John, that he finally got and stayed clean.

Clean dozen, in the books! I’m not afraid. pic.twitter.com/g5Ww2gKoqF

Eminem discussed his drug addiction, his near-fatal overdose, and his road to recovery on a new podcast

“I remember like when I first got sober and all the sh-t was out of my system,” Eminem recalled. “I remember just being like, really happy and you know, everything was like f—king new to me again.

“So it was the it was the first album [Relapse] and the first time that I had had fun recording in a long time. So, during this fun something happened and something like completely morphed into, like, a lot of my songs have always been like, you joke around with friends and sh-t and then you might put some of that sh-t in a song, but I don’t know man it was like the first time I started having fun with music again.

“And, and, and, like, re-learning how to rap. You remember that whole process was really… took a long time for my brain to start working again,” Eminem admitted.

“Yeah, I mean, you literally were coming off of an overdose and they had to sort of stabilize you with a few medications,” Rosenberg added. “And some of them took you a minute to adjust to. Let’s just leave it at that. So, you’re learning how to rap again almost literally, right? Because it’s the first time, probably, you were creating without having substances in your body in… however many years, right?”

Listen to the entire fascinating 48-minute interview and discussion between Eminem and Paul Rosenberg below.