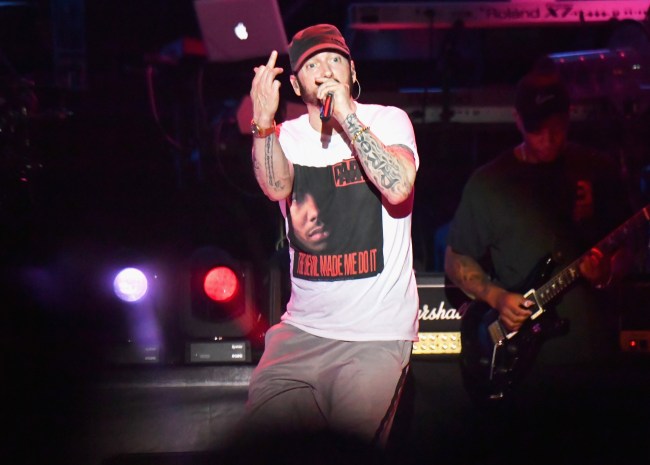 Eminem has just broken his own world record for ‘fastest rap’. Marshall Bruce Mathers III is 47-years-old these days but age hasn’t slowed him down one bit.

He released Music To Be Murdered By on January 17, 2020, an album which features guest appearances from Young M.A., Q-Tip, Ed Sheeran, Anderson Paak, Juice WRLD, and others. The track ‘Godzilla’ features Juice WRLD and on the 3rd verse Eminem raps so quickly he’s just broken his own record set by ‘Rap God’ back in the day.

This is the first time in a long time I can recall hearing about words-per-second in reference to anything other than typing but I guess that’s a testament to how f’n fast Eminem is. Here’s his ‘Godzilla’ track from Music To Be Murdered By, Eminem’s 11th studio album. It is the third verse that you’re listening for here:

According to a report from HotNewHipHop, Eminem and Juice WRLD will now enter the Guinness Book of World Records thanks to this song:

As initially posted by an Eminem fan site and picked up by DatPiff and HipHopLately, it has been reported that Eminem officially broke his own record, replacing “Rap God” with “Godzilla” and penning another fast-paced masterpiece. The sweetest part about this all is that the late Juice WRLD, who is featured on the hook, will live on forever in the Book of World Records. Spitting a total of 229 words in 30 seconds, Eminem did enough in his third verse to replace himself at the top. If you’re unsure of just how fast that is, he was rapping 7.6 words per second. If that ain’t impressive, I don’t know what is.

To see Enimem pull this off just three years shy of his 50th birthday is amazing and to be honest, I really look forward to an 85-year-old Eminem trying to beat his own record. The vision of an octogenarian Em trying to spit bars so fast his dentures fall out really warms my soul and I hope that the pursuit of breaking his own records gives him a reason to stay active after he picks up his AARP card in 18 years from now.

You can find the full album online wherever it is you download your music, I’m sure.